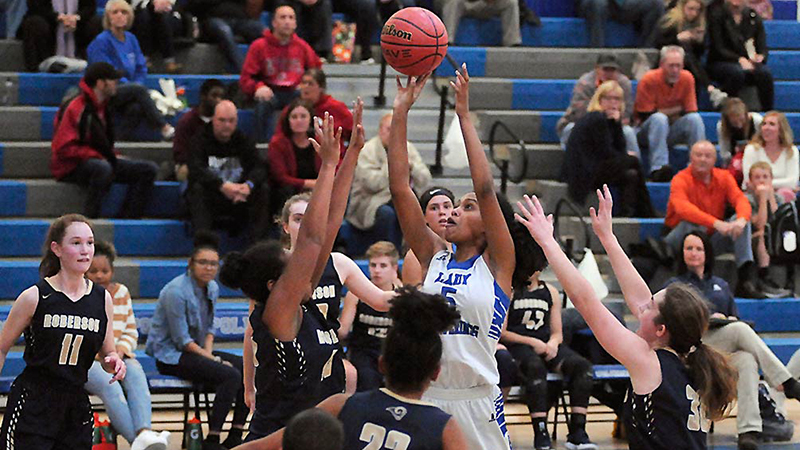 Marissa Twitty looks to score on a short jumper in the lane during the first half of Monday’s matchup with T.C. Roberson. (Submitted photo)

Polk County matched baskets and points with T.C. Roberson for much of Monday’s non-conference clash, but the Rams inched ahead in the final two minutes to secure a 57-52 win at Polk.

That allowed Roberson to take a 53-50 lead with 1:29 remaining. Olivia Overholt cut the margin to one with two free throws at the 1:21 mark, but Polk wouldn’t score again, and the Rams were 4-for-5 at the foul line in the final minute to seal the win.

“We put four quarters together tonight. I’m very proud of the effort,” said Alm, who starred as a basketball player at T.C. Roberson in her high school career and is a member of the school’s Hall of Fame.

“I felt like we controlled the boards, too, which was important.”

Polk trailed 18-12 at the end of the first and still by that six-point gap at the half, 36-30, after a frenzied second period in which the two teams combined for six 3-pointers. Polk had four of those as Olivia Overholt and Tori Thompson each hit two.

“They hit a few threes, so we got out of our zone and went back to man,” Alm said. “We applied a lot of pressure, which created some easy shots for us. We didn’t always make them, but we created them. I felt like we controlled the tempo of the game.”