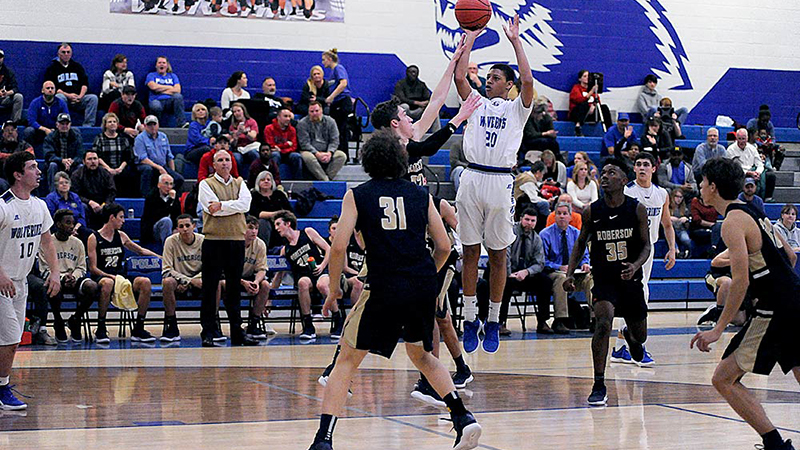 Polk County’s Keyandre Thomas elevates for a jumper during the first half of Monday’s matchup with T.C. Roberson. (Submitted photo)

The Wolverines could just use a few more shots to go into the net.

Polk County kept pace with T.C. Roberson for much of Monday’s non-conference matchup, but the Rams held on for a 57-51 victory.

The Wolverines (0-17) saw Roberson (3-16) pull away in the second period, turning a 14-13 contest at the 5:32 mark into a 28-18 lead at the half. Polk had just one basket in that five-minute span, Zeke Hermann’s layup plus free throw at the 1:26 mark, scattering two free throws in the remaining part of the quarter.

That stretch proved crucial as Polk County more than held its own in the final two quarters. The Wolverines, though, could never get closer than six points, often needing a basket that just wouldn’t drop.

“As Roy Williams says, it looks a lot better when the ball goes through the net,” said Polk County head coach Lemont Jones. “We’re playing hard, we’re not quitting. We’re playing in situations that will help us down the road.

“Tonight we played some junior varsity kids and they responded well. I liked what I saw. Good things are coming from them.”

Polk County is set to travel Wednesday to Mitchell for a Western Highlands Conference game before returning home Friday to host Mountain Heritage.