LANDRUM – By noon Monday, the 85-foot long Pullman Sleeper car was settled in its proper place on the platform next to the Landrum Depot.

Campbell Crane Rental of Greenville arrived in Landrum at 9 a.m. with two cranes and the whole process took a little more than 3 hours. The wheels had arrived on a separate trailer and had to be put in place on the tracks in the concrete platform.

Once the wheels were set, workers fastened cables to either side of the front and rear doors of the 70-ton railcar and the cranes slowly lifted it from the trailer bed to the wheels. The cranes held the car suspended over the wheels as workers checked to be sure the alignment was perfect. 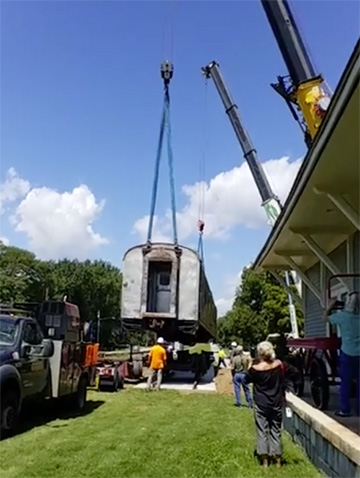 A worker checks to be sure the railcar is aligned perfectly as it is placed on its wheels on the platform near the Landrum depot. (Photo submitted by the city of Landrum)

“A lot of people came to watch,” said Landrum City Administrator, Rich Caplan. “There are some videos on the city’s Facebook page.”

Caplan said though the museum will be a part of Landrum, the car is truly for the whole area. “It’s named the Pacolet River,” Caplan said. It’s for everyone around the area.” 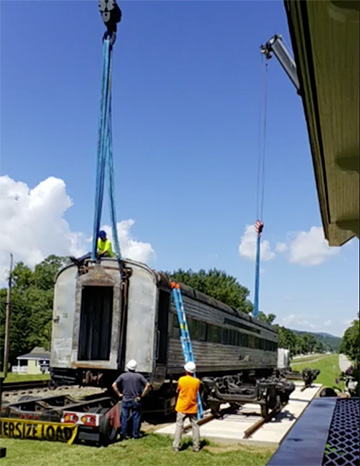 A worker climbs to the top of the Pullman sleeper to fasten cables on either side of the railcar’s entrance on each end. (Photo submitted by the city of Landrum)

The railcar is one of 24 cars built in the series during the late 1940s and named for area rivers. This particular car was actually named “The Pacolet River,” and ran the line between Spartanburg and Asheville, coming through Landrum. The city plans to refurbish the railcar as a museum to honor the rich railroad history that made the town.

Caplan said the next step will be for the museum board to clear out and inventory the items inside the car, which are mostly couches, chairs and beds upholstered in 1970s oranges, tans and reds. They plan to leave one unit intact to show how people traveled long distances on the rails.

They will also shine up the exterior a bit Caplan said. “The exterior is in very good shape, ” he said.

The museum board will be working to raise funds and asking for donations of railroad and Landrum memorabilia to place in the museum. “People are very excited,” Caplan said.