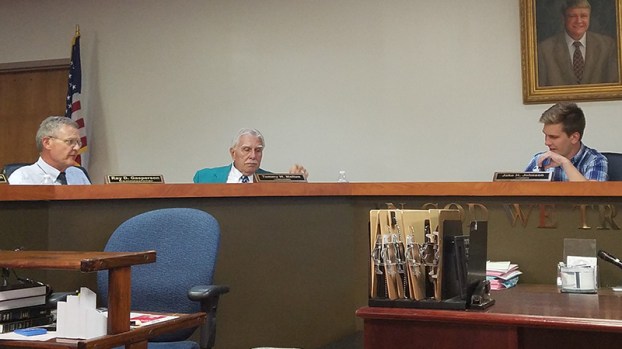 MILL SPRING — After hearing all but one person say they are against golf cart use on Pea Ridge and Moore Roads, the Polk County Board of Commissioners denied the requests to add the roads.

Commissioners met Monday and held a public hearing on requests to add the two roads to the county’s ordinance. Polk County allows golf carts on Green River Cove Road and has an ordinance to regulate them. Residents are allowed to petition the county to add other roads, as long as the roads are posted as 35 mph or less.

Commissioners heard from over a dozen residents during the public hearing, with Grey Lancaster, who petitioned the county to add Moore Road, being the only to speak in favor of golf cart use.

Commissioners denied both requests, with Pea Ridge Road being denied unanimously and Moore Road denied by a 4-1 vote. Commissioner chair Jake Johnson voted against denying Moore Road, saying he wanted to table the decision to get more information.

Most residents said traffic on Moore Road has increased dramatically and speeding is an issue, which would make golf carts dangerous there.

Moore Road resident Mary Dill said her 82-year-old husband was recently hit on a tractor and the lady did not stop to see if he was injured. She said she asked commissioners during the last meeting to have the police patrol the road because there is a speed limit in effect but nobody is going by it. Dill asked commissioners how they are going to patrol golf carts if they cannot stop people from speeding.

“They hit a tractor for God’s sake,” Dill said.

Pat Larson, also of Moore Road, said she lives about a mile from the Tryon International Equestrian Center and it is dangerous to go to her mailbox. She said the bridge over the creek is really dangerous, and there is an incline where a golf cart could not be seen. She spoke of witnessing a 7-year-old on the back seat of a golf cart who almost fell off.

“(Golf carts) might be a convenience for people going to rentals or the winery, but it’s a safety issue as far as I’m concerned,” Larson said.

Shannon Carney, of Moore Road, spoke of the 12-15 percent grade on the bridge and a double blind curve.

Carney said a neighbor told her Monday that she is afraid to come out and get her mail.

She said there are other counties in North Carolina who have banned golf carts, including Wake Forest after a teenager was killed on an incline.

“I guarantee that incline was not 15 percent,” Carney said.

Moore Road resident Richard North said following the recent closure of Pea Ridge Road for construction, Moore Road has seen a large increase in traffic to get to TIEC. He mentioned, as well as others, a large pothole and blind spots.

“With an increase in traffic, and you put golf carts in the mix, it could be dangerous,” said North.

Glenn Smith said he’s had to nearly jump from his lawnmower to keep from getting hit by cars. He said cars come by his house at 50 and 60 mph every morning.

“I’m watching the racetrack in front of my house,” Smith said.

Smith said Moore Road needs to have a police presence and officers writing tickets to get cars slowed down.

County Manager Marche Pittman said he asked the North Carolina Highway Patrol to post some officers on Moore Road after the speed limit was lowered to 35 mph.

“From what I’m hearing, that is not happening, and I promise I will follow up with that,” Pittman said.

Pittman also said he will follow up with the North Carolina Department of Transportation about the pothole.

Mary Edwards asked who would be liable if she hit a golf cart that did not have lights on it.

Edwards also said if a police car can be parked at TIEC for safety, “let’s put one on Moore Road.”

Lancaster said from listening to the comments, he does not think anyone is really against golf carts, but everybody is against the speeding and traffic. He said Green River Cove Road is very dangerous and golf carts are allowed there.

Golf carts are allowed by state law on roads that are posted 35 mph or less. Carts require a state vehicle identification number, which costs approximately $1,100, as well as other requirements to the golf cart, including head lights, tail lights and turn signals. Commissioners were requested earlier this year to regulate its own ordinance for residents to save money. County inspections for golf carts do not require a VIN number and are approximately $100.

Commissioner Shane Bradley said commissioners should have never approved an ordinance to regulate golf carts anywhere since the state regulates it already.

“The state already has something set and we should have just walked away,” Bradley said. “I’d just love to see us rescind the ordinance completely.”

Rail car pulls into Landrum Saturday evening LANDRUM — After 70 years, the Pacolet River has come home to its... read more