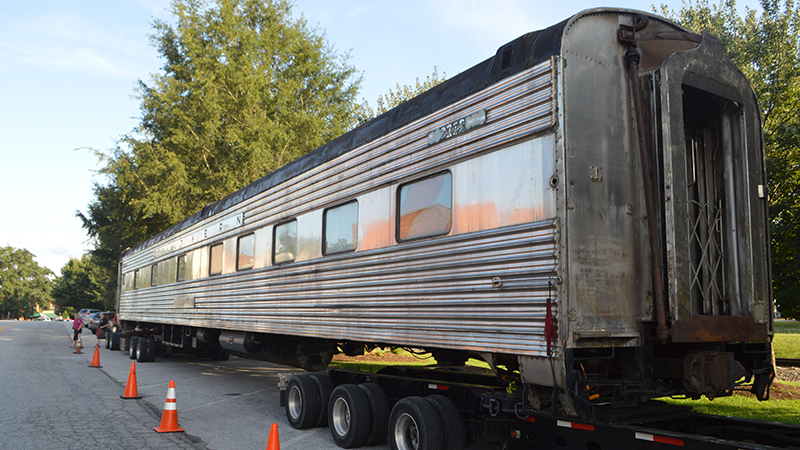 The Pacolet River Pullman arrives in Landrum Saturday a little after 6 p.m. The car is stationed on North Trade Street near the depot until cranes can offload it on Monday. (Photo by Catherine Hunter/Tryon Daily Bulletin)

LANDRUM — After 70 years, the Pacolet River has come home to its final resting place in Landrum. Rather than being sold for scrap, the graceful old, Pullman Sleeper railcar will become a museum, honoring the rich railroad history that made the town.

The car is 85-feet long and weighs approximately 70 tons. Yet for all its size and heft, though the years of service have tarnished its stainless steel, the Pacolet River still retains the grace and elegance of another time. It speaks of adventures on the rails, when things moved more slowly and trains took us to far away places. It calls us to ride the rails in search of a bygone age. 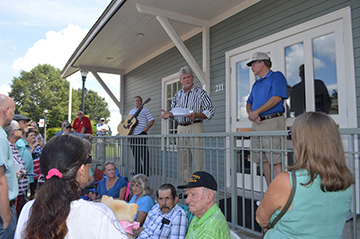 Landrum Mayor Robert Briggs (center) recognizes and thanks all those who helped with the railcar museum project during the ceremony. (Photo by Catherine Hunter/Tryon Daily Bulletin)

The rail car, which was donated to the city of Landrum, was due to arrive sometime Thursday evening, but heavy rains delayed the shipping. City officials hoped it would arrive on Friday in time for an afternoon welcoming ceremony, but had to reschedule again for Saturday.

The wheels arrived during the day Saturday. Reports came in that, because of two flat tires on the trailer, the rail car was again delayed at a rest stop just west of Asheville. At 3 p.m., with the train in route, folks gathered at the Landrum Depot to celebrate the historic event. 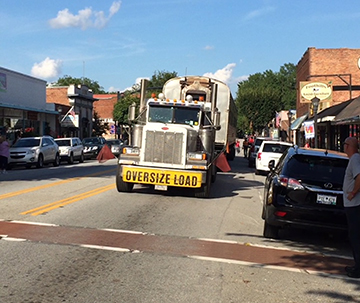 The Pacolet River came through Landrum around 6 p.m. Saturday. (Photo submitted by city of Landrum)

Landrum Mayor Robert Briggs opened the ceremony by recognizing and thanking all those who helped with the project. “We’ve wanted to build a museum for Landrum,” Briggs said. “We wanted it to have a connection to the railroad.”

Briggs asked Mayor Pro Tem, Billy Inman, who is serving on the Interim Museum Board, to give a brief history of the railcar and it’s significance to the town.

“This may be the only car of the Pacolet River series that is still in existence,” Inman said. The railcar is one of 24 cars built in the series during the late 1940s and named for area rivers. This particular car was actually named “The Pacolet River,” and ran the line between Spartanburg and Asheville, coming through Landrum.

Landrum City Administrator, Rich Caplan, handed out wooden Railroad whistles for those gathered to blow in celebration. Dana Bergman played and sang, “The City of New Orleans,” since this railcar once traveled the line between New Orleans and New York City.

At 6 p.m. Saturday, Landrum Police escorted the transport truck carrying the Pacolet River car into Landrum. Residents and officials gathered for a tour of the inside. The rail car was parked on North Trade Street awaiting the cranes that will offload it on Monday.

A half-century of service to the humanities