Local rider blazing past all obstacles in his way 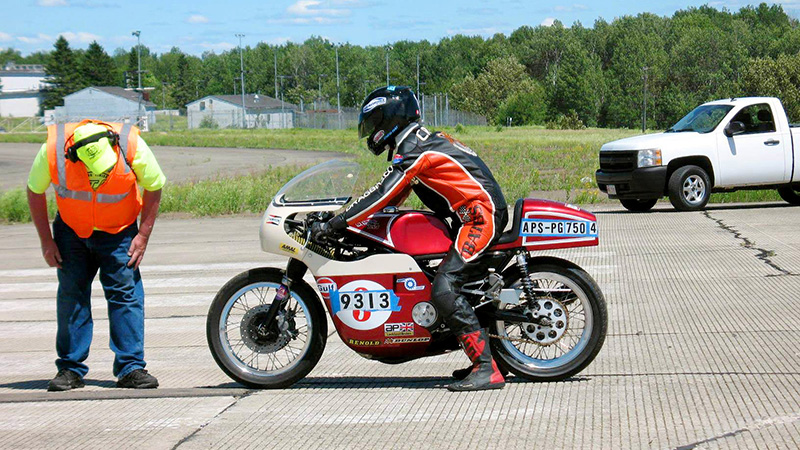 MILL SPRING — Mill Spring’s Thomas Cronan does not merely overcome his challenges — he leaves them behind in the dust.

Since he began his career riding motorcycles in 2003 — at just 16 years old — the Polk County speedster has caught the attention of many in the industry for his extraordinary talent on two wheels. Over the past 15 years, Cronan has set land speed record after land speed record at race tracks across the U.S., including in Texas, Ohio and Maine.

He has never allowed any obstacle to serve as a speedbump on his way into the record books — especially not the fact he was born with an extremely rare birth defect. 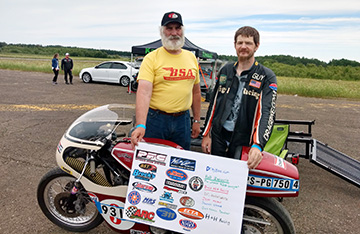 Mill Spring’s Thomas Cronan (right) has been racing since he began his career in 2003 at 16 years old, and has set numerous records at tracks across the nation. (Submitted photo)

“The best piece of advice I ever received was, ‘If you only try and do what other people are doing, you will only go as fast they have gone,’” Cronan said.

Earlier this month, Cronan set nearly a dozen new 1 and 1.5-mile speed records at the Loring Air Force Base in Maine, through a series of land races hosted by the Loring Timing Association, which took place July 9-15. Cronan earned eight accolades riding a 1971 Rob North BSA Rocket 3 motorbike, owned by Bart Boucher, of Black Bart Racing, and another two riding a Buell owned by Tom Reay.

Setting records up North has become rather old hat for Cronan. The racer has been earning spots on the Loring Timing Association’s record book since 2012, he said. 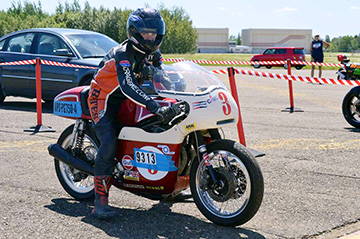 Cronan poses for a photo on a 1971 Rob North BSA Rocket 3 motorcycle, which he used to set eight speed records at a recent land race at Loring Air Force Base in Maine. (Submitted photo)

Cronan has been in love with motorcycles since he was 14 years old, when he attended his first land race in Maxton, North Carolina, where he witnessed riders blazing down the track at speeds upwards of 230 mph, he said. In spite of still being in school, Cronan was determined to purchase his own bike and begin blazing his own path in the high-speed racing world, he said.

“My parents told me to get a job, keep my grades up and I could do it,” Cronan recalled.

Cronan did not let the fact that he was born with Esophageal Atresia/Tracheo-Esophageal Fistula — a rare birth condition in which the esophagus is not connected properly to the stomach, which can cause issues with breathing and swallowing — discourage him from pursuing a career in the already dangerous field of racing, he said.

After purchasing his first bike, a Honda Rebel, Cronan began racing around the area, where several veteran racers took him under their wing, Cronan said. In spite of his age, the Mill Spring man caught the attention of a bike owner named Don Smith, who offered Cronan the opportunity to pilot one of his motorcycles — an opportunity that resulted in the rider being featured in a national racing magazine.

“I haven’t made any crazy amounts of money or anything, but I’ve gotten to do some fun stuff,” he said.

Cronan has worked with Boucher since 2009. The two are currently working on another super-charged bike for Cronan to begin smashing records on, a customized Kawasaki Ninja ZX-12R, which the rider hopes to be able to field soon.

For Cronan, who turns 32 next month, racing is not just a chance to feed his inner speed demon. It is a way for him to live life to the fullest, regardless of the condition he was born with.