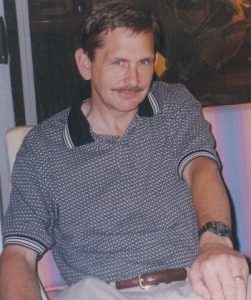 The family lived in various places due to Don’s career with the department of agriculture, including Beaufort, South Carolina.

Floyd lived in Agency, Missouri, for one year with his grandparents on the family farm. He lived in Arvada, Colorado, from junior high through high school, and graduated in 1966 from Arvada High School. Floyd attended Colorado State University and graduated with a degree in political science in 1971.

He worked as a security guard at the Boltz Junior High new construction site after the building burned. He then worked at an industrial supply business, later becoming part owner.

His passion for politics led him to a career in research, consulting and writing, which he enjoyed for many years. He was active with the Democratic party in the 1970s and ‘80s.

Floyd worked from home to be with the kids and manage the house, while Mary Lynn worked outside the home. He drove the kids around, helped with homework and science fair projects. He enjoyed helping manage Zach’s soccer team.

He shared his interests of history, geology, woodworking, photography, agriculture and of course, politics, with everyone. Floyd was an avid Rams fan, followed the Broncos and world soccer.

He quietly and privately lived with Parkinson’s disease after his 2008 diagnosis. He enjoyed the exercise classes and Big & Loud therapy. A highlight was the Parkinson Association boxing class!

He helped others through organ donation.

Special thanks to Fort Collins Fire & EMT responders, and the emergency room and intensive care unit staff at Medical Center of the Rockies. We are so grateful for all of these amazing, special people!

A service is planned for 11 a.m. Monday, July 30, at St. Luke’s Episcopal Church, 2000 Stover St., Fort Collins, with a light lunch reception following. A private family internment is planned for later that afternoon.

Donations in lieu of flowers can be made to the Parkinson Association of the Rockies, Larimer County Humane Society, Garth Englund Blood Center Fort Collins or the Donor Alliance Denver.