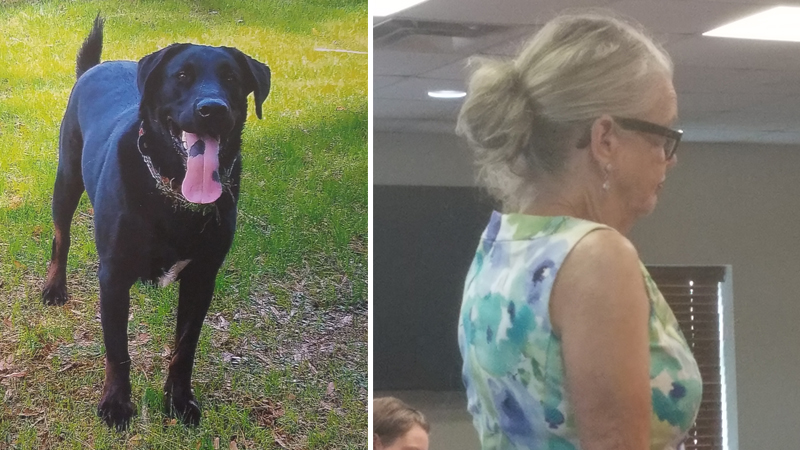 Polk County Board of Adjustment hears appeal over seizure of canine

COLUMBUS — After hearing almost two hours of testimony Tuesday, the Polk County Board of Adjustment will soon decide whether or not to overturn the health director’s order to temporarily seize a dog that was deemed dangerous last August.

The board met Tuesday and heard testimony from Ronnie Mann, the owner of the dog in question; Patti Lovelace with Polk County Animal Control; and people who say the canine has bitten three people in the neighborhood.

Polk, Rutherford, McDowell Health District Director Karen Powell testified that she made the decision to place the dog on a 10-day hold in June, according to the law.

Neighbors recently attended a Polk County Board of Commissioner meeting regarding the alleged dog attacks.

Mann testified on Tuesday that the 2-year-old Labrador retriever mix, named Harry, has not bitten anyone.

In the letter of appeal, Mann denied that Harry has bitten three people and two dogs, denied that the animal was dangerous to public safety or health, and denied that it was necessary for the dog to be seized and impounded.

On Aug. 15, 2017, the board of adjustment deemed Harry a dangerous dog. The time limit to appeal that decision was 30 days, which passed.

Mann claims the Aug. 15 hearing was improper because her request for a continuance to hire an attorney was denied. She also says she was not allowed to submit evidence, as she was not given the form to do so.

There are several stipulations on an owner of a dangerous dog, including that the dog be muzzled and leashed while off the property, and properly contained while on the owner’s property.

Lovelace testified that, after Harry was deemed a dangerous dog, on Sept. 4, Mann was walking Harry down the road when the dog got loose and allegedly bit a woman.

Neighbor Jane Lynch said she was sitting on her own property when she was bitten.

“It’s kind of bad when you are not safe on your own property,” Lynch told the board on Tuesday.

Board member Michael Axelrod asked Mann how Harry got away on Sept. 4, saying the dog either scratched or bit someone.

“It sounds like you are not able to control your dog,” Axelrod said.

Mann testified that Harry did not bite Lynch. She said she was walking the dog on a leash while going to get her mail when Lynch said “hello” and Harry ran over.

Mann said after the Lynch incident, she sent Harry for training and he also has a special collar so that even a child could control the dog now. She said now she rarely walks the dog anywhere in the neighborhood.

Mann’s attorney, Lee Atkins, questioned Lovelace on upgrades the dog owner has made to her property, including required fencing. Lovelace said all requirements have been met and animal control has signed off on the requirements.

The board of adjustment will decide whether or not to uphold Powell’s decision to seize Harry. The dog was taken for 10 days and returned to Mann on June 17.

The board of adjustment will reconvene at 4 p.m. on Monday, July 23, in the R. Jay Foster Hall of Justice, located in the Womack building in Columbus.