Once again, I find my inspiration for a story from the online newsletter “This Week in Tryon Horse Country.”

Judy’s great comment about how horses helped build our nation is so right on.

From the wagon trains of the early settlers to the cavalry charging over the hill to save embattled ranchers, horses have been side by side with us in settling this country. My great-grandmother traveled from North Carolina to Arkansas in a covered wagon. 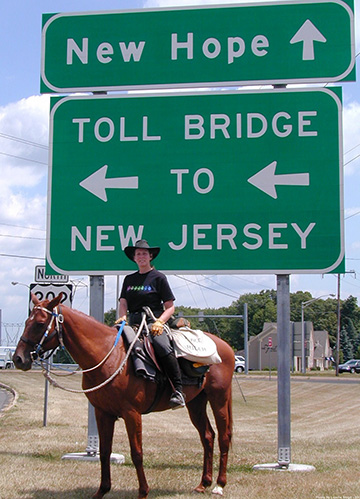 When we decided the mail had to travel throughout the West, the Pony Express was born on horseback, and it was horses that worked the great cattle ranches of the West.

For the American Indian, horses were a symbol of power and wealth.

In the old West, horse stealing was a hanging offense because, in those vast, dry distances, a horse could mean the difference between life and death.

A few years ago, I was traveling through Missouri, Oklahoma and Wyoming. As I cruised west on Interstate 70, I gazed out at the miles and miles of prairie and tried to imagine crossing it in a covered wagon, pulled by horses, mules or perhaps oxen.

I thought about my own horseback journey from South Carolina to New York City. During that ride, I had roads to follow, a store on every corner and could pick up a phone and call for help at any time. Even so, the journey was long, isolating and frightening.

I felt the distance in every stride my horse would take. I worried about him staying sound, and what would happen if he were hurt.

A few times, I became lost, and the thought of having to retrace the few miles I had wandered off course was daunting.

Years later, as my truck ate up the miles on I-70 heading through Wyoming, I thought about those early settlers.

They had no roads and, if a map existed, it was sparse at best. There were no stores to buy food or a bottle of water. If their horse went lame, they were stuck, in the middle of nowhere, with no food, no water and no help.

I remember gazing at the landscape and thinking about how the wagons could not cross even a small ravine a few feet wide. If the ravine ran for a few miles long, it could take days to go around, all in a country where being delayed in finding the next water hole up ahead could mean death.

Even considering all the hardships they faced, the early settlers could make it from St. Louis, Missouri, to Oregon or California in about three months. That’s amazing to me.

I remember what it was like traveling by horseback. You begin to measure time in parts of the day — began riding, stop for food, continue riding, stop in the evening. The days tend to run together and become as endless as the miles.

What would this country be like if we didn’t have horses to help those early settler cross those vast, seemingly endless wastes? How long would it have taken us to settle the interior? What was it like for the American Indians before the Spanish brought horses back to these shores?

When I think of the growth of this nation, I think about the horses that made it all happen. There is a great saying, “Look back at our struggle for freedom, trace our present day’s strength to its source; and you’ll find that man’s pathway to glory is strewn with the bones of the horse.”

It took just over 100 years from the time our country was born until we had crossed and settled an entire continent. Yes, the railroad was part of that settlement, but the horse took us there first.

No wonder the horse was voted the bicentennial animal in 1976. Were it not for horses, where would we be?