No go on new Polk TDA

COLUMBUS — Polk County, Saluda and Tryon will be on their own collecting occupancy tax for at least another year, as state legislators failed to pass a bill to create the new Polk County Tourism Development Authority.

The county and two towns agreed this year to join their respective tourism departments, where the county would have been allowed to collect 6 percent occupancy tax in the unincorporated areas of the county as well as in Saluda and Tryon. Columbus did not want to join the new authority.

In exchange, the county, Saluda and Tryon approved an interlocal agreement to give the towns 5 percent of their occupancy tax. The towns’ benefit would have been collecting 2 percent more in occupancy tax, as they currently only collect 3 percent. 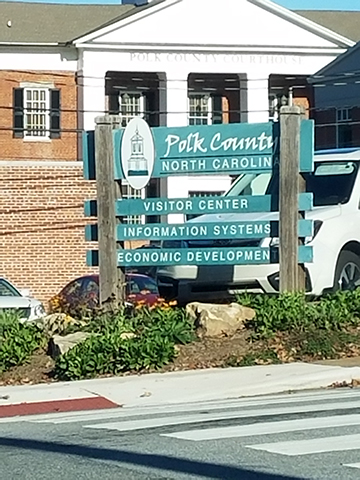 Polk County, Saluda and Tryon will have to spend at least the next year collecting separate occupancy taxes, as a new county tourism development authority bill was not approved by the state legislature in last week’s session. Pictured is Polk County’s tourism department, located off Mills Street in Columbus. (Photo by Leah Justice/Tryon Daily Bulletin)

The towns would also have benefitted by having the county collect all the taxes.

State Sen. Ralph Hise, with the 47th District, told the county this week that no occupancy tax bills were approved in the session.

“Leadership refused to move any occupancy tax bills in either chamber this session due to residual conflict from last session’s taxes,” Hise said.

Polk County Manager Marche Pittman said this week that the county has done all of the hard work putting a solution together and hopes to try to get another bill passed next year.

“If all the governments agree, we will try again when the long session opens next year,” Pittman said.

The county and the towns all recently approved new budgets for fiscal year 2018-2019, with the fiscal year beginning on Sunday.

Tryon approved its budget, including an occupancy tax budget, in case the bill did not pass legislation. The town will continue to collect its occupancy tax as it always has, with a tourism development board.

The county also has an economic and tourism development commission, which administers its occupancy tax.

The city of Saluda was recently approved by the state to collect its 3 percent of occupancy tax. The city was assuming the new county TDA would be formed, so has not yet set up its own board to collect and administer collections.

Saluda City Manager Jonathan Cannon was unavailable for comment as of press time to answer questions on how Saluda plans to proceed in light of the bill not passing.

Conserving Carolina sparks the search for Appalachian Loosestrife in…