Laughter worked for Polk County EMS for 30 years as a paramedic and instructor. He died on June 18, at the age of 58. 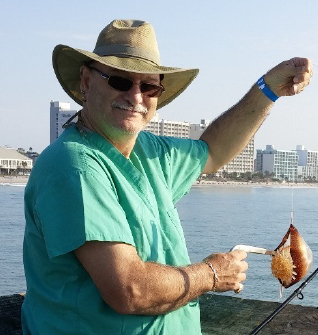 Area emergency officials will gather to celebrate his life on Aug. 11 at the Columbus Fire Department. The event will include food, a raffle, 50/50 tickets and live music from John Edney and Carey Upton to raise money for medical bills.

In 1990, Laughter was one of Edney’s instructors while he was going through EMT classes, he said. Once he started running first responder calls with the Columbus Fire Department, Edney knew everything was good when he saw the ambulance pulling up and Laughter was on board.

“John was a good man, and he will be greatly missed by all of us,” he said.

“Not only did he provide the best care at the paramedic level, but he always took the extra time to listen to the patient’s concerns and made sure they felt safe and comfortable,” Pace said. “I never once saw him get angry or aggravated with a patient, which is easy to do sometimes.”

Tryon Fire Chief Geoffrey Tennant said when he thinks about Laughter, he thinks of him as a competent and compassionate paramedic, who was dedicated to giving each patient the best care he could, no matter the circumstances.

“John also always seemed serene on even the most difficult calls,” Tennant said. “If he was paddling like mad below the surface, you never knew it. This made him a calming presence, which helped patients and their families, work through the most difficult situations. As good as he was a paramedic, he was even a better man.”

Laughter first became a paramedic in Polk County in 1987. He first worked as a paramedic when the county’s ambulance service was through St. Luke’s Hospital. He later became an EMT instructor.

“He taught me more about being a paramedic on an ambulance than two years of college,” Hipp said.

Hipp felt honored to be his partner and to learn from his experience, she said.

“John was dedicated, funny, compassionate and always stayed composed, no matter the situation he was faced with at the time,” Hipp said.

Virginia Plyer said Laughter was a second father to her and many others growing up.

“In so many ways, he is what inspired me to become a medic,” Plyer said. “He was someone who gave selflessly, and stepped in without hesitation to save a life or help those in need.”

Plyer said Laughter treated her and others like family, and that is “just who he was.”

“Not only was he a co-worker, but he was a true friend,” Cochran said.

Green Creek Fire Chief Jeremy Gregg said Laughter taught his EMT class over 20 years ago, and he was sad when Laughter retired.

“It is indescribable hearing the news that he had passed away,” Gregg said. “John was a great paramedic, instructor, mentor and friend. He was one of a kind.”

Donations for medical bills can also be taken to Hometrust Bank. People may contact Cochran for more information at 828-899-9111.