Ike was retired in December 2016 after the German Shepherd began having seizures. With his seizures worsening recently, the 8-year-old dog was euthanized on Thursday morning at Bonnie Brae Veterinary Clinic in Columbus, surrounded by Polk County officers who saluted the K-9 prior to vets putting him down.

Ike was purchased by the sheriff’s office in 2013 when he was just 16 months old. He was trained in narcotics, tracking, building searches, article and area searches, and criminal apprehensions.

The police dog was instrumental in several drug cases during his tenure with the sheriff’s office. 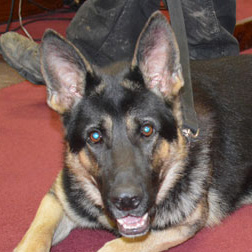 The Polk County Sheriff’s Office held a motorcade to take retired K-9 Ike on Thursday to Bonnie Brae Veterinary Clinic in Columbus to be euthanized for failing health. The sheriff’s office purchased Ike in 2013, with the county retiring him at the end of 2016. (Photo by Leah Justice/Tryon Daily Bulletin)

Ike was 7 years old at the time of his retirement.

A motorcade transported Ike Thursday, with saluting officers greeting him at the veterinary clinic.

Ronnie Russell, Ike’s handler, thanked officers and Sheriff Donald Hill on Facebook for all they did for him and his family.

“It’s a blessing to have them all,” Russell said. “K-9 Ike has crossed over the rainbow bridge and they were all there to say goodbye and be there for my family. Y’all will never know how much this means to me and my family.”

Russell lost another K-9 German Shepherd to cancer in 2013 prior to getting Ike. The sheriff’s office used seizure money as well as donations from the community to purchase Ike.

Hill said Thursday he wanted to do the motorcade as a memorial and to show respect for Ike. Hill was a K-9 handler prior to becoming sheriff.

“It’s sort of his last ride,” Hill told reporters Thursday at Bonnie Brae. “Ike was a good dog. They want to work. That’s their biggest joy every day, is going to work.”

Hill said people should realize how important these dogs are for law enforcement and the military, saying people would be surprised how many human lives K-9s save.

“I know for a fact, the last one I had, he probably saved my life twice from being shot,” Hill said.

The sheriff’s office has two K-9s in service now.

Getting to the root of the matter