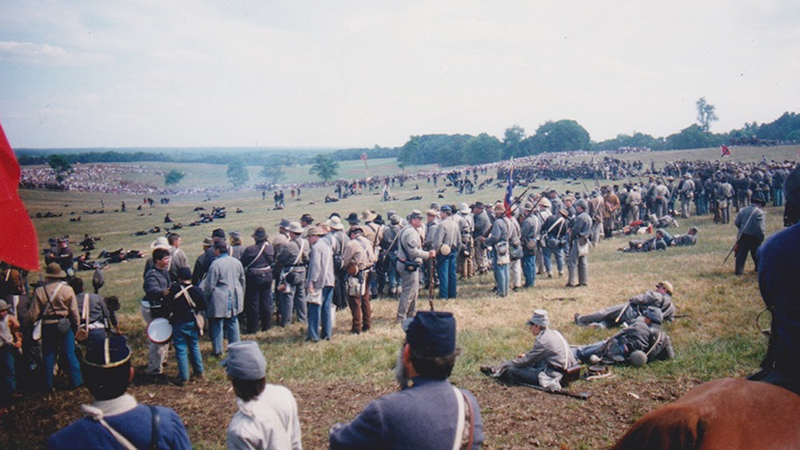 Approximately 400,000 to 500,000 spectators turned out each day to see the 135th reenactment of the Battle of Gettysburg. There were also 25,000 reenactors in camp for whom event organizers provided water, firewood, food, porta johns and emergency services during the week. (Photo submitted by Catherine Hunter)

Half-a-million people is a lot, especially when you think of people coming to the area.

It kind of boggles the mind to think of the traffic and the number of cars.

This is the estimated numbers for the total spectator attendance for the World Equestrian Games. However, if you break it down to the expected attendance of 40,000 to 50,000 a day, it doesn’t seem like so much does it? I suppose it’s all in how you look at it.

I was honored to ride courier to the commanding general in the 135th reenactment of the Battle of Gettysburg. We had 25,000 reenactors and 500 horses in camp.

As people freak a little about the total number of spectators coming to WEG, I can’t help but think there were that many attending Gettysburg each day. I’m not kidding, we’re talking 350,000 to 500,000 each day, for four days, poured into the area to see the reenactment. That was in addition to the reenactors in camp.

Now Gettysburg is bigger than Tryon, Mill Spring and Columbus all put together, but it’s still not that big. The population is around 7,700, and was closer to 6,000 back in the ‘90s when we descended on them.

I think I heard hotels were booked 100 miles or more away for months in advance. I was glad to have my tent, small as it was.

Of course I was involved more on the reenactor side than the spectator side. I was impressed with the sheer numbers of reenactors and the logistics of moving, feeding, watering and providing porta johns for that many people for four or more days.

The camps and battlefields were located on 1,000 acres of land. Vehicle parking was a mile or more away.

We had 18-wheeler size tanker trucks bringing in water. Though the event did provide a few meals, most reenactors bring their own and cook over an open fire in camp.

People on four-wheelers periodically roamed the camps selling ice to the reenactors. You could also get a meal down on sutlers row. Sutlers are the venders that sell “goods and sundries” to the reeanctors, just as the sutlers would follow the armies in the 1860s.

Sutlers also dress in period clothes and set up authentic style tents. They sell everything a reenactor could need or want, from uniforms to hoop skirts.

The camp was huge! It was so large it tended to isolate the reenactors to their own units because walking to another area was just too far. I was really glad to have a horse to get around.

It took hours to form up and march the infantry to the battlefield. Just bringing up several thousand into line helped me understand why that war was fought the way it was — lines of men standing 50 feet apart shooting at each other. Trying to move that many soldiers takes a great deal of communication and planning.

I suppose that’s what they’re going through over at the Tryon International Equestrian Center. It may sound like a lot, but if Gettysburg can pull it off, surely we can.

We may be inconvenienced and the traffic may be a pain, but we’ll survive. After all, this is the Foothills and the people here band together.

We can either fuss about the traffic or we can enjoy seeing world-class horses and riders. We can fuss about the roadwork going on, or we can look forward to meeting people from all over the world.

We can also choose to do a little of both. I’m just glad I have a horse. Maybe I can beat all the traffic by just riding over to the venues.

Surely TIEC has a picket line set up where I can leave my horse while I take pictures?