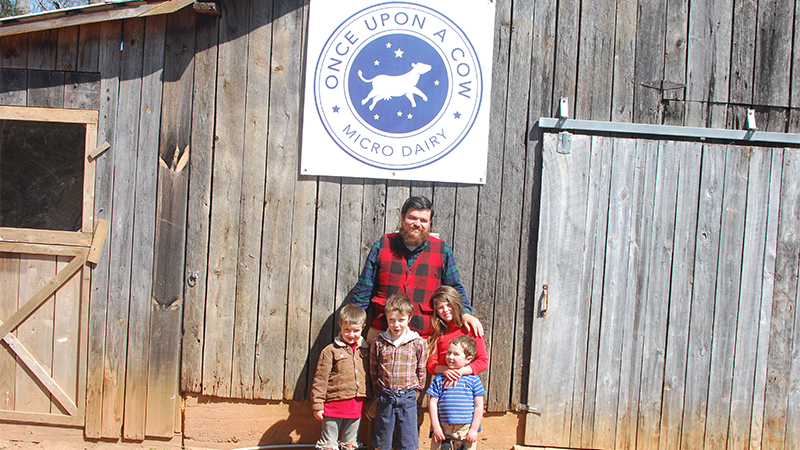 GREEN CREEK — Every morning, as the sun begins to rise over his family’s quaint 11-acre farm on the outskirts of Green Creek, Jason Craig puts on some overalls and a pair of black boots, and prepares for another hard day at the office.

The office, in this case, is a retrofitted horse barn, located just yards away from his home, which now serves as the center of operations for Polk County’s first new grade A dairy operation in decades — Once Upon a Cow Micro Dairy. 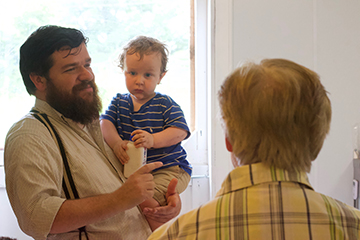 Jason Craig, owner of Green Creek’s Once Upon a Cow Micro Dairy, explains the health benefits of his company’s yogurt to a customer, Marge Nowak, while holding his toddler son, Joseph. (Photo by Ted Yoakum/Tryon Daily Bulletin)

Stepping inside the wooden barn, Craig — often joined by the farm’s dogs and several of his children — gets to work milking his heritage Jersey cows (a breed renowned for its rich milk) or producing the next batch of the business’ drinkable yogurts, which, after just several months of production, are popping up in stores and markets across Polk County and beyond.

“There are very few things as demanding as dairy,” Craig said. “You have to milk twice a day, no matter what. It doesn’t matter if you have a migraine, if it’s Thanksgiving or Christmas, if you’re tired, or if your wife just had a baby.” 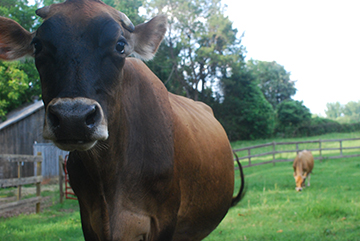 Some of the farm’s cows, which travel through a tunnel beneath the farm in order to reach the grazing pasture across the street from the barn. (Photo courtesy of Patrick McLendon/Growing Rural Opportunities)

In spite of the long hours and arduous path he and his wife, Katie — who recently gave birth to their sixth child — have traveled to get to this point in their lives, Craig said the couple is at last living the dream that first brought them to Polk six years ago.

Unlike many people who wind up running their own farms, Jason and Katie do not have agriculture in their blood.

While Craig grew up in Pittsboro, North Carolina, a small rural community located in the heart of the state, he and his family were never farmers themselves. Instead, Craig decided to pursue a career in writing and working with a nonprofit group that helps mentor boys. 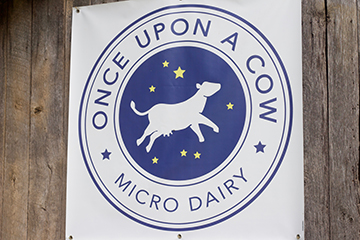 While studying for his master’s degree at The Augustine Institute in Denver, Craig began doing extensive research into why many young teenage boys withdraw from their peers, sometimes with violent consequences. His findings led him to conclude that the trend started during the Industrial Revolution, when most fathers began working outside the home instead of in the fields, may be at the root of many issues young men face today.

Craig and his wife eventually  decided they wanted to make a living at home in order to be close to their children — which led them to come to Polk County to pursue a career in dairy farming.

After arriving, the couple began working at different farms in the county in order to learn the skills — and the lifestyle — needed to make it in agriculture, Craig said. At the advice of Hank Panchyshyn with Achin’ Back Acres, the couple bought two Jersey cows to learn how to milk.

In 2017, the couple purchased Achin’ Back Acres after Panchyshyn and his wife decided to retire. The Craigs then began renovating the former horse barn into a dairy operation, adding places to milk the cows and a creamery, while using a tunnel underneath the farm to lead the cows across the street to graze.

Thanks in large part to the mentorship of local dairy farmers Doug and Alan Harmon — who owned one of Polk County’s grade A dairy farms for years before recently selling their operation to Looking Glass Creamery — the Craigs finally received the coveted certification several months ago, and have begun producing yogurt inside the creamery. The business is one of the few dairies in the state to have a farm and creamery on the same premises, Craig said.

“We have been working towards this for six years, and we just launched [the business],” he said. “If we had known how difficult it was going to be back then, we have may have been a bit hesitant — but now that we are here, we’re happy.”

Similar to the business model that has allowed craft breweries to thrive in a world of mass-produced beer, Craig said Once Upon a Cow focuses on producing small quantities of high-quality dairy products, intended for sale to local customers and businesses. Unlike large factory creameries, which typically culture their yogurts for only a few hours before adding substances to finish the process, Once Upon a Cow cultures its products for seven hours with no artificial additives, leading to a tastier product with a powerful probiotic punch, Craig said.

The couple currently has five adult cows and two calves, which they grass feed, Craig said.

“We find that sunshine, grass and fresh water produces the best milk — and you cannot make good yogurt without good milk,” he said.

The farm is currently selling its products directly to customers at several local farmers markets, as well as to local businesses such as Columbus’ Openroad Coffee and the Tryon Coffeehouse Co-Op. Craig said the couple is looking to expand the micro dairy’s presence in the coming months, including selling its products at the Hendersonville Community Co-op.

“If we can have a profitable business while producing healthy food for our neighbors, that’s what we want to do,” Craig said. “We have a passion for farming and for supporting our local economy. We’re hoping that pays off with a viable business.”

People can learn more about Once Upon a Cow by visiting onceuponacowmicrodairy.com.