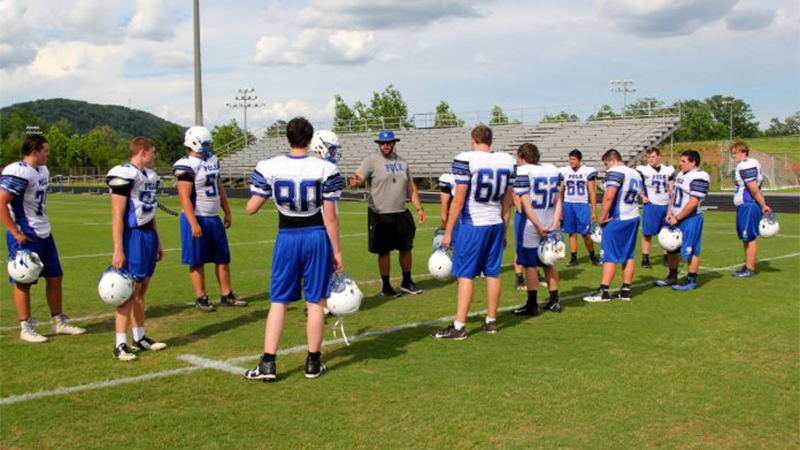 The rain that has plagued the region in recent days has made for a few scheduling headaches for Polk County head football coach Bruce Ollis.

They are nothing too serious in the grand scheme of things, in light of all that has happened in recent days in the area. But the weather did impact the Wolverines’ spring player development sessions, as well as the debut of the Moolah Madness fundraiser.

Polk County managed to get a week’s worth of development sessions in last week; the Wolverine 12th Man tried again Friday to hold Moolah Madness.

For obvious reasons, no cow will be used in the gym for the patty bingo fundraiser.

“If a week is all we get in, we’re not going to be too discombobulated about it,” Ollis said of the spring schedule. “We want to be considerate of the end of school and exams, and let the kids focus on the rest of the school year.”

There is a lot of positive energy around Polk County’s fieldhouse these days, largely due to the interest in the Wolverines’ offseason conditioning program. That effort has eased Ollis’ concerns about being on the field during the spring skills period.

“The big thing for me is the development of team chemistry and camaraderie that’s being done in the weight room,” he said. “We’ve had great numbers in the weight room. We’re talking about all-time records. That’s building a lot of confidence in the team as we’re getting stronger in there.

“I can’t tell you how pleased I’ve been with the work ethic in the weight room. If you include our rising ninth graders, we have 76 guys on our list right now. That would be awesome if we get every one of those.”

Getting all of those players will provide Polk County’s coaching staff with the means to reach a long-held target — having a true junior varsity program.

“Our goal is to have a Friday night team and a Thursday night team,” Ollis said. “We’re not going to eliminate eight-quarter players [who play on both nights], but we’re working to limit that. It would be incredible to have 35 to 37 players on both teams. We could also have more one-way players, especially on Thursdays.”

The final week of school and graduation will be the focus for Polk County’s players over the next few days. But soon the Wolverines will ramp up their summer efforts in preparation for the Aug. 17 season opener at Chase, just 11 weeks away.

“The best thing I can say about the team and the football program right now is that we are developing a lot of confidence,” Ollis said. “That bodes well for us.”