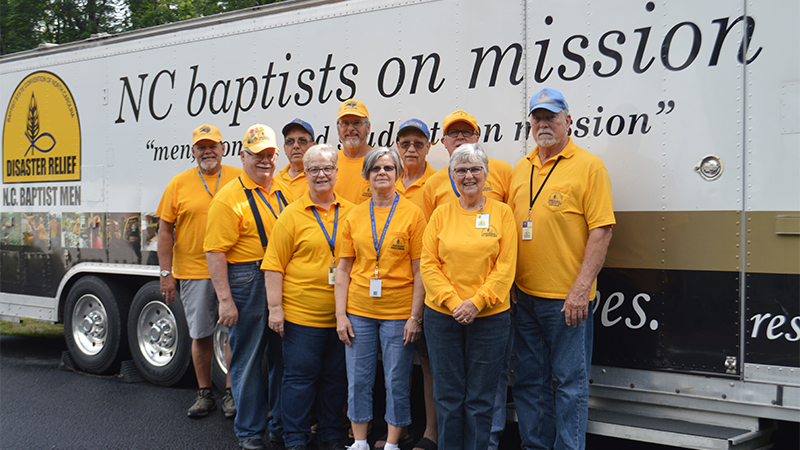 Approximately 12 volunteers from as far away as Spruce Pine, Raleigh and east of Charlotte have set up a relief center and volunteer headquarters at Midway Baptist Church in Columbus. (Photo by Catherine Hunter/Tryon Daily Bulletin)

Relief center for storm victims set up in Columbus

COLUMBUS — They come with chainsaws and skid steers, wheelbarrows and shovels.

They offer showers and laundry service, and they stay as long as they are needed.

NC Baptist Men, a division of Baptists on Mission, has set up a relief center at Midway Baptist Church in Columbus. The Baptists on Mission are all volunteers who work to help individuals and families affected by disaster rebuild their lives and homes.

Anyone affected by the recent storms can go to the church for help with shelter, hot meals and other assistance. The organization has also set up hot showers and laundry facilities at the Senior Center off Skyuka Drive in Columbus.

NC Baptist Men Disaster Relief Team Leader Harold “Chatty” Dodd said there are currently 12 team members on site who are doing damage assessments. A resident can fill out a form requesting help, he said. Dodd’s team goes out to the site, assesses the damage and reports back about the work that needs to be done.

“We have 51 requests for help already,” Dodd said. “I expect that will double or triple.”

Once the weather clears and the roads are safe to travel, NC Baptist Men will organize volunteer work crews to begin clean up. Dodd said they do everything from removing downed trees and furniture to ripping out walls and spraying for mold. Depending on the area and the nature of the disaster, they often help with rebuilding as well.

“Anything we can do that is safe to help the home owner, we do it,” he said.

Dodd and members of his team have worked many disasters around the country, including hurricanes Harvey, Katrina and Sandy. They bring in volunteers who have been specially trained for disaster relief work, and also help coordinate local volunteers.

“A lot of people in the community want to help. They just don’t know what to do or where to begin,” he said. “I have a whole list of local folks who want to help.”

Dodd and his team are ready to begin work as soon as the weather clears and emergency personnel let them know it is safe to travel the roads. With this storm, they have been able to stockpile their supplies and get set up and ready to go, he said.

“All I have to do is start calling the people on this list,” he said.

Not only have individuals in the community offered to help, Dodd said many of the local churches have offered space and volunteers. He added that the local fire, rescue and emergency operations have been a big help in organizing, determining locations for set up and handling other logistical issues.

Anyone affected by the storm or anyone who wishes to volunteer can stop by the relief center in the Family Life Center of the Midway Baptist Church, located at 1201 North Carolina Highway 108, past Polk County High School outside of Columbus. Dodd said they prefer for folks to come by so they can meet with them and talk about their needs.