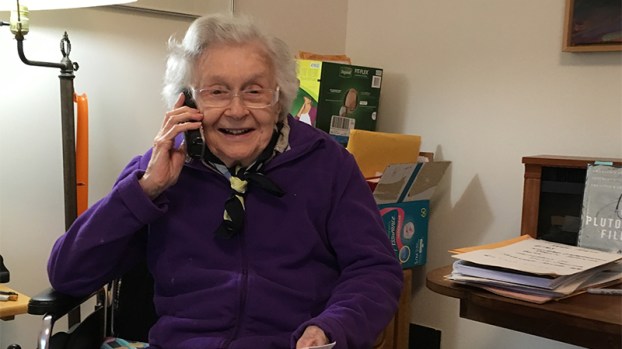 “What is it about the Freedom of Information Act you don’t understand?” 98-year-old anti-nuclear activist Ruth Thomas frequently asks the Nuclear Regulatory Commission as she demands sensitive government documents. (Submitted by Ellen Thomas)

The Foothills’ own Erin Brockovich on a mission

COLUMBUS — When people think of anti-nuclear activists, they do not often picture 98-year-old white-haired great-grandmothers — but Columbus’ Ruth Thomas is still protesting the issue.

Thomas is often seen sitting in her wheelchair in her room at Ridge Rest in Columbus, surrounded by stacks of papers, folders and files. For nearly 50 years, she has worked quietly behind the scenes to stop nuclear waste shipments through the Carolinas.

“What is it about the Freedom of Information Act you don’t understand?” Thomas frequently asks the Nuclear Regulatory Commission, as she demands sensitive government documents.

Thomas said she was living in Columbia and teaching school in her 50s when she first became aware of what was happening.

“I didn’t read newspapers much, but I did read the Sandlapper magazine,” she said. “There was an article by the attorney, Townsend Belser, about a nuclear reprocessing plant in South Carolina. I thought, no way! I’m going to everything I can to stop this thing.”

That was in the 1960s, and it began a lifetime of activism for Thomas. She went to Belser’s office and he gave her a list of things to do, including starting an organization.

“I would just ask people on the street if they knew what was happening with the nuclear shipments,” she said.

By 1972, Environmentalists Inc. was up and running, and is still active today.

“We had very few people and no money back then,” Thomas said. “But Jimmy Carter and some legislators could see the evidence, and posted a ban against reprocessing plutonium and uranium.”

For the last several years, Thomas has been working against the department of transportation, which allows shipments of radioactive liquid fission products to be shipped from Canada to the Savannah River Plant. She said it is the same type of process as the plutonium and uranium shipments years ago, just a different substance.

Thomas said she was very concerned about the fact that those involved have not done an environmental impact study on the effects of the material. She added that she has found written evidence showing at least one canister of the substance in the first shipment was leaking.

“They just turned the leaking side to face the wall where it couldn’t be seen,” she said.

Fellow anti-nuclear activist, Ellen Thomas (no relation) is working with Ruth in her fight against the radioactive shipments.

“She [Ruth] gets these thick, dense documents and goes through them page by page, line by line,” Ellen said.

According to Ellen, one of the dangers from the current shipments is that the nuclear waste is in liquid form. She is concerned that although those driving the trucks are shielded from the radiation, people in the cars surrounding the shipment are not. She also expressed concern about accidents and spills.

“This is something you make a bomb out of and use it to wipe out communities,” Ruth said. “I still can’t believe that they’re doing this. It’s horrible.”

Both Ruth and Ellen also work with the American Association of University Women, and meet regularly with Becky Collins, of Columbus, another AAUW member. Collins said she is amazed at the work that Ruth has done, and continues to do.

“She’s a special lady,” Collins said. “We need more like her.”

“We need to get the word out to people about this,” Thomas said. “They have to do something about it.”

The large puddles that dotted W.J. Miller Field on Thursday night did not do much to deter Polk County’s girls... read more