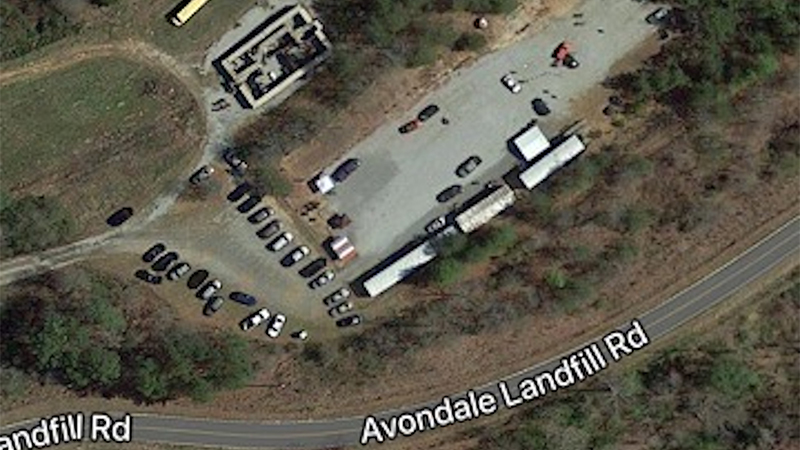 The law enforcement training center in Rutherfordton is a 360 degree training center, similar to the type Henderson County is considering for Macedonia Road. However, Henderson County Sheriff Charles McDonald said that attempting to travel there as frequently and consistently as needed for adequate training was a logistical “nightmare.” (Google satellite image provided by Save Saluda)

Board chair: Macedonia Road not perfect, but best option available

One reason is the low population density of the area. Wyatt added that the property is bordered on one side by Interstate 26, and on another by the North Carolina Game Lands, where people hunt. Third, the property was available for purchase.

“From the bird’s eye view, it was a potential property,” Wyatt said.

He explained that in order to have access to the property for feasibility studies, the county spent $1,000 to place it under contract.

“That assessment may come back and say this is not a good piece of property for this project,” he said.

The letter also noted that Henderson County has, “. . . gone to great lengths . . .” to find the best location in the county, and has, “. . . expended substantial resources evaluating the possibility of a completely indoor facility.”

Wyatt also explained that the contract allowed the county to lock in the price so, if the property was suitable, they were able to purchase it for $655,000 instead of the listing price of $800,000.

It is standard procedure for governments to discuss property acquisitions during nonpublic sessions in order to protect the contract negotiations, Wyatt said.

“People don’t realize that we can’t talk about it before we have the price locked in,” he said.

According to Wyatt, as soon as they had agreements for the property and the feasibility studies, the county notified neighbors to the property about the feasibility studies. He added that this was done by mail before they spoke to the news media, so that the neighbors received the information directly from the county rather than from an outside source.

Wyatt said Henderson County has been in discussions for several years with surrounding counties about a law enforcement training center of the type proposed for the Macedonia Road location. He said this type of training center would offer “360-degree realistic training for the officers.”

“Most training centers available today are linear,” Wyatt said. “We all know the Parkland School in Florida is not linear. One of the reasons some of the officers did not go into the school during the shooting  is they had not had the right training.”

Though opponents to the Macedonia Road locations have researched and found several training centers within a 50-mile radius, Wyatt said the only center with this type of facility is in Forsyth County. He added that the Edneyville facility is a linear facility owned by the state.

It is Wyatt’s opinion that trying to modify such a state-owned facility would not be feasible.

Henderson County Sheriff Charles McDonald said though Rutherford County does have a 360-degree training facility near Cliffside, the logistics of availability and travel would be “a nightmare.”

“It can be done — just not with the consistency and frequency we need,” McDonald said.

He and Wyatt both also noted the expense involved with paying officers to travel to other sites, paying a replacement officer to handle their shift and the travel expenses involved.

McDonald said he was sympathetic to the concerns of the citizens opposing the Macedonia Road location, and appreciated the respectful way they have presented their viewpoints. He also pleaded for help in finding another workable solution.

Though concerned citizens anticipate the Henderson County Commission voting on the Macedonia Road site on May 7, the letter from Edney stated he anticipates the board taking some action in the May 16 meeting.