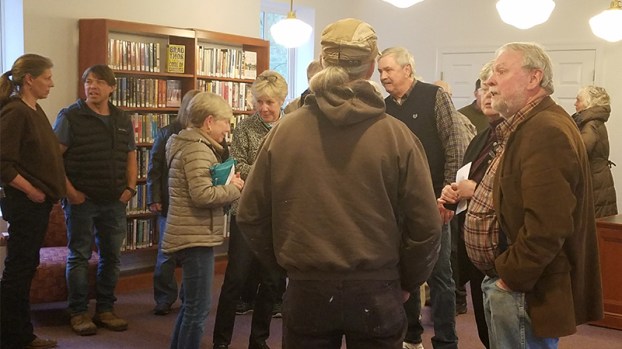 Residents speak outside the meeting following several making public comments to the board. Saluda residents packed the Saluda Board of Commissioners meeting Monday night to oppose a training facility being proposed by Henderson County on Macedonia Road. (Photo by Leah Justice/Tryon Daily Bulletin)

City to write letter in opposition to Henderson County

SALUDA — Saluda residents say people who live in Hendersonville may think Macedonia Road is remote, but residents who call it home do not want an officer training facility to be located there.

The Saluda Board of Commissioners decided to write a letter to Henderson County stating its opposition to a proposed training facility on Macedonia Road.

Henderson County is proposing to build a training facility, including an outdoor shooting range for its sheriff’s office, at 2823 Macedonia Road. The property borders the North Carolina game lands.

Jay Bergen said the idea being described by Henderson County officials that the land is remote is “ridiculous.”

“It may be remote from Hendersonville, but it’s not remote to Saluda,” Bergen said.

Bergen described the area as a twisting road that does not get plowed when it snows. He said the idea that this pristine land is going to be destroyed is really obscene, and that Henderson County is spending $6 million.

There is a Facebook page called “Save Saluda,” which urges residents to oppose the facility. Saluda Lifestyles sent out an email blast this week about the plans for the facility.

“The Henderson County Board of Commissioners has placed a contract on the property at 2823 Macedonia Road (which borders North Carolina Gamelands) for the purpose of constructing a training center for officers in Henderson County and possibly from all over [the state],” the email stated. “This decision appears to be on a fast track, and the location is the third attempt to locate this center and range. There has been much opposition at each location.

“There are many concerns the residents on Macedonia Road are expressing, not the least of which is traffic on a gravel road, noise pollution and damage to our natural resources.”

Sara Bell told Saluda commissioners this is all happening quickly, and she knows leaders have no control over what Henderson County does, but, as the city’s elected officials, she asked that they open up a line of communication with the county.

“We need your support on this,” Bell said.

Bell also said she has spoken with a law enforcement officer with the state, and found out officers have to get recertified twice a year, that the facility in Edneyville is not overcrowded, that the state just built a range in Shelby and that there is a range in Asheville. 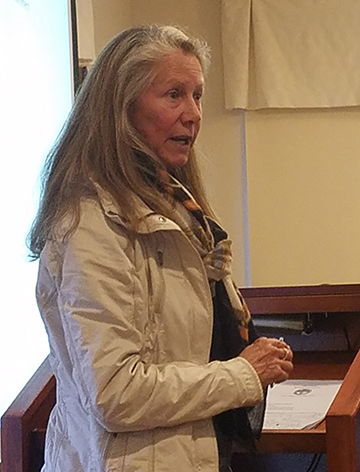 Nancy Wilson told Saluda commissioners that she and her husband bought a summer camp in the area 27 years ago. She said they started with 22 children, and now have well over 500 children from all over the world.

“They come for wellness, for laughter, for joy,” Wilson said.

She added there is no technology at camp, and she hopes they do not end up serving them with “sounds of war.”

Later in the meeting, commissioners unanimously decided to write a letter that all commissioners and the mayor will sign in opposition of the facility to send to the Henderson County Board of Commissioners.

Others urged Saluda residents to attend two upcoming meetings about the proposal.

An informal meeting is scheduled for 10 a.m. this Saturday, April 14, at the proposed location of 2823 Macedonia Road.

Another meeting for public comment is scheduled for 9 a.m., Wednesday, April 18, at the Henderson County Commissioner’s Board Room, located on the second floor of the courthouse on Main Street, Hendersonville.

Dillon Overholt fired a 79 Monday to lead Polk County to an easy win over Mountain Heritage in a dual... read more