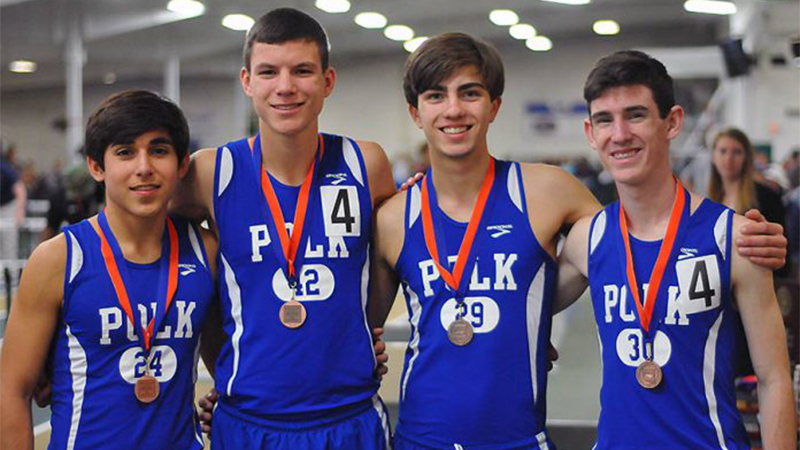 The Polk County track team is currently in eighth place in the 1 A Wells Fargo Cup standings. (Photo submitted by PolkSports.com)

Thanks to strong finishes in boys and girls track, Polk County surged into eighth place in the 1A Wells Fargo Cup standings at the conclusion of the winter sports season.

The Wolverines have 230 points in the statewide competition. Mount Airy leads the 1A division with a comfortable lead of 40 points ahead of Lincoln Charter. The Granite Bears secured a women’s basketball championship and shared third place in wrestling.

Wells Fargo Cup points are determined by a system based on performance in state championship events. All schools that finish in the top eight positions (plus ties) earn points. In the playoff events involving teams from more than one classification, Wells Fargo Cup points are awarded based on the school’s standing against other schools in its own classification. If fewer than eight schools from a classification compete in a sport, only those schools that are represented are eligible to receive the Cup points.

Points are awarded for all sports as follows: 50 for first, 45 for second, 40 for third, 35 for fourth, 30 for fifth, 25 for sixth, 20 for seventh and 15 for eighth. In the event of a tie, the schools receive an equal number of points based on the number of teams that tie and the number of teams that finish higher in the standings. Five points are awarded for each sanctioned sport in which a school competes.

The top 10 1A schools include:

Wells Fargo Cup standings are announced three times each school year – once after the fall and winter sports seasons and concluding with the overall winner after the spring sports season ends.