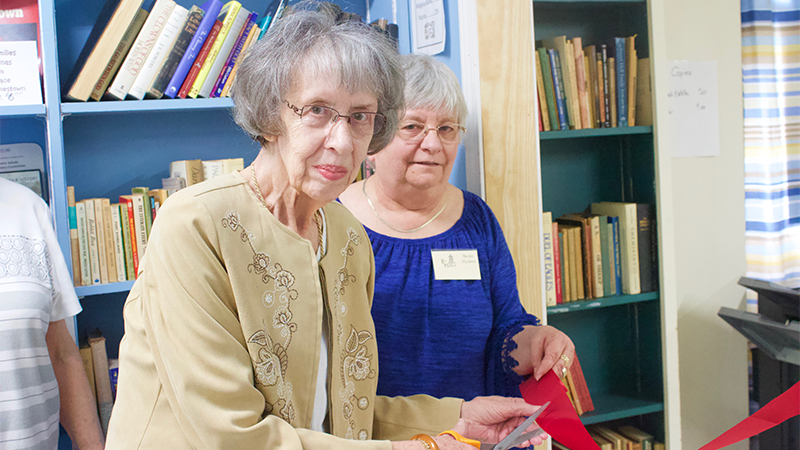 Columbus’ Polk County Historical Museum celebrated the recent opening of its new Polk Genealogy Center with a ceremony Tuesday afternoon. The new space, located inside the museum on 60 Walker St., contains copies of the family trees of around 70 Polk County families, as well as other historic records intended to assist people trace their lineage in the area. The center will also host classes to help locals get started on their journey through the world of genealogy. Pictured is Anna Pack Conner (left), former president of the Polk County Historical Association, cutting the ribbon to the center, along with Becky Hudson, chairman of the Polk County Historical Museum Genealogy Committee. (Photo by Ted Yoakum/Tryon Daily Bulletin)

CORRECTION: The original version of this article had the incorrect title of Becky Hudson. It has been corrected below.

COLUMBUS — In spite of the impressive, several-hundred-page tomes that much of the world’s history are contained within, chronicling the tales and stories of the community where a person lives is not a task reserved solely for dedicated historians.

All one has to do is start with themselves and their kin. A shelf containing copies of Polk County family trees is among the many resources available inside the recently opened Polk Genealogy Center. (Photos by Ted Yoakum/Tryon Daily Bulletin)

Thanks to the recently-opened Polk Genealogy Center, it is easier than ever for area residents to take the plunge into their family histories and record them for future posterity.

The Polk County Historical Museum hosted a grand opening for its new genealogy section inside the museum, located at 60 Walker St., Columbus, on Tuesday. The center, which opened to the public last month, offers a plethora of resources for people wanting to learn more about their ancestors, including books containing copies of family trees of around 70 Polk County families, as well as old census records, obituaries and records from the Genealogical Society of Old Tryon. The center is open for free to the public. (Photos by Ted Yoakum/Tryon Daily Bulletin)

Museum visitors may peruse the center free of charge during regular museum hours, which are 10 a.m. to 1 p.m. Tuesday and Thursday, and 10 a.m. to 4 p.m. on Saturday. While guests are encouraged to perform their own research, they can also pay to have one of the museum’s genealogy docents assist them.

In addition, the museum will begin offering classes to people interested in learning more about genealogy, including how to get started on researching familial history, how to fill out ancestral charts, how to look up family information online and — most important of all — how to determine if the stories one’s ancestors have passed down are actually accurate, by comparing them against birth certificates, historic records and other materials, Hudson said.

“A lot of people think they can just go online and look up their family’s history — which you can, but the information may be wrong,” Hudson said.

The historic museum has offered genealogy research materials for the last several years, at the prompting of Anna Pack Conner, the former president of the Polk County Historical Association. The retired Polk County High School teacher and local historian has been long interested in genealogy, as her own lineage in Polk County goes back to the 1700s, when the region was still known as Tryon County, she said.

Polk County visitors soon began donating copies of their own family trees to the museum, which quickly dominated the single shelf where the materials were placed. With the growing demand for genealogy materials, the museum leadership decided to create a dedicated space for family research this past fall.

Hudson herself realizes just how important genealogy is to help someone become connected to the history of their home. She is a member of the McFarland family, which has called Polk County home for generations — her grandfather was a former Polk County sheriff, while her father, William Austin McFarland, was a prominent attorney in the area, Hudson said.

Wanting to know if the stories her family used to share about themselves and their history were true, she decided to take a genealogy course from Conner — and quickly found herself immersed in the hobby, she said.

“My father always used to say to me, ‘don’t say anything bad about anyone from Polk County — they’re probably kin,’” Hudson said. “When I started doing research into our family’s history, I found out he was right.”

Conner, who cut the ceremonial ribbon during Tuesday’s grand opening, said she was delighted to see her dream for the museum come to life, and hopes the genealogy center will encourage more people to come in and record their family’s stories, to add to Polk County’s rich history.

“I’m just so pleased and grateful that so much work has been put into [the center],” Conner said.

People interested in attending a genealogy course or learning more about the center may call the museum at 828-894-3351 or may visit www.polknchistory.org.

New face on the force