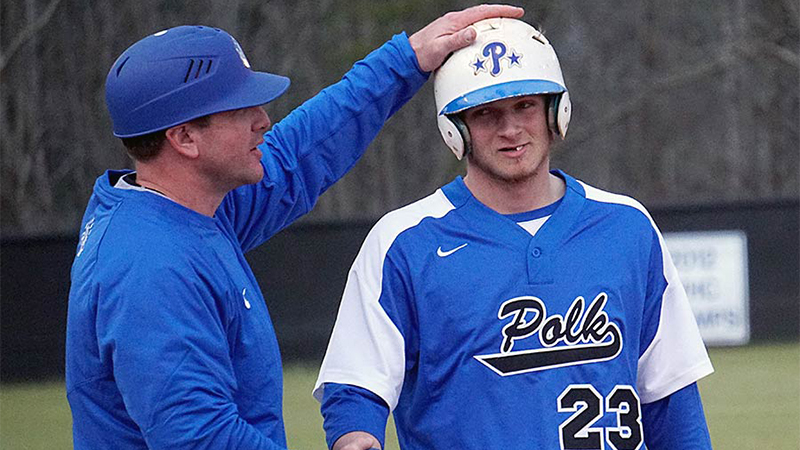 The ball had settled somewhere in the woods behind Polk County’s new batting cage. Holden Owens was still somewhere around second base on his home run trot.

Polk County baseball coach Billy Alm turned to face the Wolverine dugout and calmly noted, “That thing had a stewardess on it.”

Holden Owens is having more fun this spring than at any point in his four years at Polk County. Not having quite as good a time are the opposing pitchers charged with trying to get Owens out.

The Polk County senior heads into Tuesday’s home game with Hendersonville with first-half numbers likely as good as any in school history. He’s hitting .531 in 13 games, with 24 RBIs and 22 runs scored. Owens has hit five doubles, four triples and four home runs, including that moon shot far over the left-center field fence. His .638 on-base percentage reflects the 13 walks he’s received in 47 plate appearances.

“When you look at his stats, it looks like he’s playing a video game,” Alm said. “We expect him to do big things every time he’s up. It’s exciting to watch him at the plate.”

Owens has been a key cog in a Polk County offense-scoring 10 runs a game thus far this season, that production driving the Wolverines’ 11-2 start. While Owens is enjoying his offensive success, he’s much more excited about the team record.

“It’s been pretty dang fun,” Owens said. “I haven’t had a winning season since I’ve been here in anything. It’s fun to win. All the guys on the team are having fun, too.”

An all-state selection as a junior, Owens didn’t rest on those laurels. He spent last summer competing with Charlotte-based CBC Baseball, his play there earning all-tournament honors at the World Wood Bat Association 17U qualifiers, among other accomplishments. He also worked with a hitting coach and was a constant presence in Polk County’s offseason weight program, everything pointing to his senior season.

“All the hard work is paying off,” Owens said. “The weightlifting has helped the whole team.”

Alm has seen Owens help the Wolverines in other ways beyond his on-field efforts.

“With so many young guys, they look up to him. They watch what he does and watch his work ethic when he’s in the cage and on the field. That’s passing down. It’s passing down to Gunnar (Alm’s son, a fifth grader). Right now, Hunter is Gunnar’s hero. He’s doing good things for baseball in this county.”

What Owens would most like to do in the second half of the season is bring Polk County its first conference title since 2012 and earn the Wolverines their first playoff win since 2011.

“I want to win ballgames,” Owens said. “I want to finish out the year by going deep into the playoffs.”