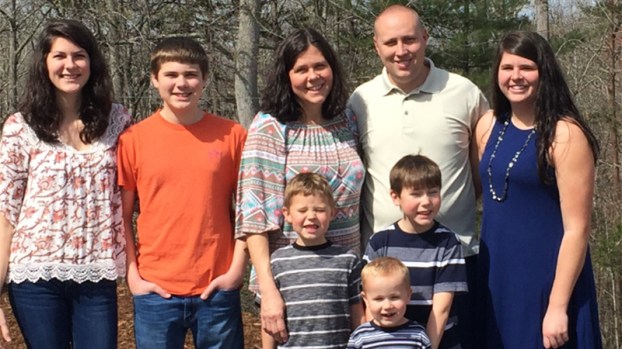 COLUMBUS—Barn House Ice Cream is opening this week, just in time for summer.

“We’ve done extensive remodel on the building,” Melissa said. “We re-did all the floors, the wiring and put in new plumbing and lighting.”

Henderson said their entire family turned out to help with the remodel. Keith’s father, David Henderson, did the plumbing; Melissa’s brother, Monte McCraw, did the carpentry work; her mother, Joyce McCraw, made the curtains; and Keith’s mother, Kathy Henderson, made the flyers they put up around town announcing the grand opening on Monday.

Keith’s brother, Michael Henderson, created a commercial for their Facebook page and Jessica Foster Clark designed a beautiful barn quilt in a sunflower pattern for the front of the store. The quilt is done in special colors to honor Henderson’s mother who is a recent cancer survivor.

Henderson said they named the store the Ice Cream Barn because of the small farm and all the animals they have. The Henderson’s six children grew up with donkeys, goats, sheep, horses and other farm critters. The children vary in ages from 3 through adult, and the older children will be helping in the store.

To start, the Hendersons will serve Hershey’s Ice Cream in 32 flavors along with sugar-free options, Hawaiian shaved ice, fresh squeezed lemonade and limeade, sorbets and sherberts. In the future, Henderson hopes to be able to add locally made ice cream and custards.

Though the store will stock the standard cake cones, the Hendersons will hand make and roll the waffle cones right there in the store. Other home made treats include hot fudge cake, brownie Sundays, banana pudding, Butter Finger cake and apple dumplings with ice cream on top.

The store may also host birthday parties, large groups or other events. Henderson said anyone interested in reserving the space for a party or gathering should call 828-802-1149.

The Ice Cream Barn is located 406 E. Mills St., and will be open Monday through Saturday from 11 a.m. to 9 p.m. and Sundays from 1 to 9 p.m. Henderson invites folks to visit their Facebook page for more information.

Warren Carson will talk about the traditional black section of Tryon — past, present and future — at an upcoming... read more