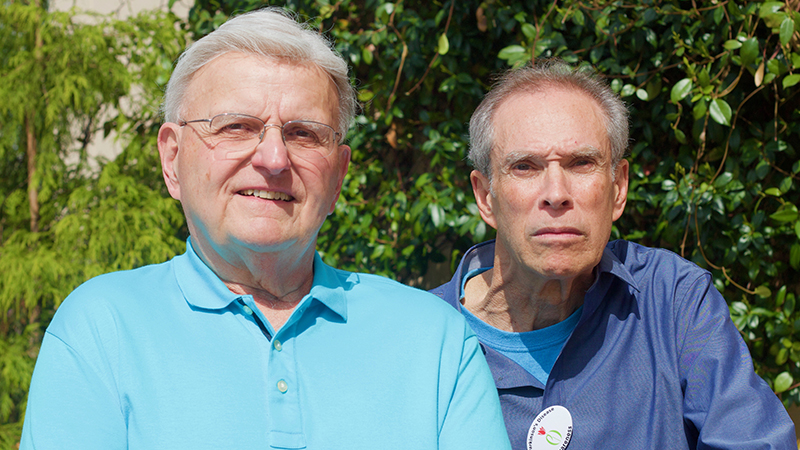 Richard Kennedy (left) and Allan Kroland, of the Foothills Parkinson’s Support Group, pose for a photo outside the Tryon Fine Arts Center Thursday. The group will host its second-ever “An Afternoon of Music, Dance, and Art” fundraiser at TFAC on Saturday, April 7. (Photo by Ted Yoakum)

TRYON —  For Allan Kroland, his journey into the complex world of Parkinson’s disease started with a simple flutter in one of his feet.

Kroland was making a living as chiropractor in Florida around 20 years ago when he began to notice the strange sensation every time he pressed down on the gas pedal in his car, he recalled.

At first, he believed it was just a problem with the vehicle. Then, he thought maybe it was a lingering effect of a recent ankle sprain.

At the time, Parkinson’s disease was just beginning to enter the public consciousness, after actor Michael J. Fox revealed he was living with the degenerative disease, which, among other symptoms, causes involuntary tremors, similar to the ones Kroland was experiencing.

Though a neurologist told the then 49-year-old Kroland he believed the condition was due to a problem with the man’s neck and not Parkinson’s, the chiropractor wanted a second opinion, to determine if it was something even more serious — prompting him to travel north to the world-renowned Mayo Clinic in Minnesota.

There, Kroland learned the cold truth: that he was among the many Americans living with the incurable condition.

“I couldn’t believe it,” Kroland said. “We had already been told it wasn’t Parkinson’s, so in a way I was relieved. But I also was numb.”

In the 20 years since his diagnosis, Kroland has committed himself to sharing the stories and wealth of knowledge he has amassed on Parkinson’s disease with others — including the many living with the condition in the Foothills.

Kroland — who now resides in Campobello — and other members of the Foothills Parkinson’s Support Group will ask for the community’s help in their mission to assist people with Parkinson’s during a special fundraiser next weekend, hosted in conjunction with Parkinson’s Awareness Month in April.

The group will host its second-ever “An Afternoon of Music, Dance, and Art” at the Tryon Fine Arts Center at 4 p.m. Saturday, April 7.

In addition to a silent art auction, the event will feature a variety/talent show, with musical and other acts to entertain audiences. Many of the performers in the lineup that evening, including Kroland, are people with Parkinson’s.

The fundraiser will also feature a performance by Eliza Burdette, a student of ballet master and Broadway performer Alex Tressor, who also has Parkinson’s. Stephen Grubba, the voice of the Greenville Swamp Rabbits hockey team and another person with Parkinson’s, will emcee the festivities.

The event is free to attend, though guests are encouraged to leave a donation for the Foothills Parkinson’s Support Group. Proceeds will go toward paying for advertising and other expenses for the group, said organizer Richard Kennedy.

The Foothills Parkinson’s Support Group, which meets the third Wednesday of the month at 1:30 p.m. in the community room of the Landrum Library, supports individuals living with Parkinson’s, as well as their caregivers or those who have loved ones with the disease. The group serves residents in Polk County and upper Spartanburg and Greenville counties, and works closely with other support groups in the area.

For people living with Parkinson’s — who deal with not only physical ailments like tremors, stiff muscles or difficultly with walking, but also face neurological problems, like depression — the group offers a chance for them to share their challenges in an open, friendly environment. It also helps them connect with resources they need for diagnosis and treatment, which can be difficult to find in the local area, Kroland said.

Members such as Kroland — who has spent decades giving talks on Parkinson’s, and has helped organize international conferences devoted to the topic — can help people see that living with the condition, while difficult, does not mean mark the end of one’s life, but the beginning of a new chapter in it.

“[Parkinson’s is] not a death sentence,” Kroland said. “It depends on how you look at it. I see it as an adventure. It’s just a part of my life.”

The group also provides support to those who are helping loved ones with Parkinson’s, such as Kennedy and his wife, who has two brothers living with the condition.

“Sometimes, [caregivers] neglect their own needs — they don’t eat, they don’t get any rest,” Kennedy said. “That means they are not in any condition to take care of others, either.”

With the number of people diagnosed with Parkinson’s expected to surpass those with dementia over the next several decades, organizations such as the Foothills Parkinson’s Support Group will become more vital to the communities they serve than ever, Kroland said.

For more information about next Saturday’s fundraiser or the group itself, people may contact Kennedy at 864-404-8001 or richardkennedy@hotmail.com.