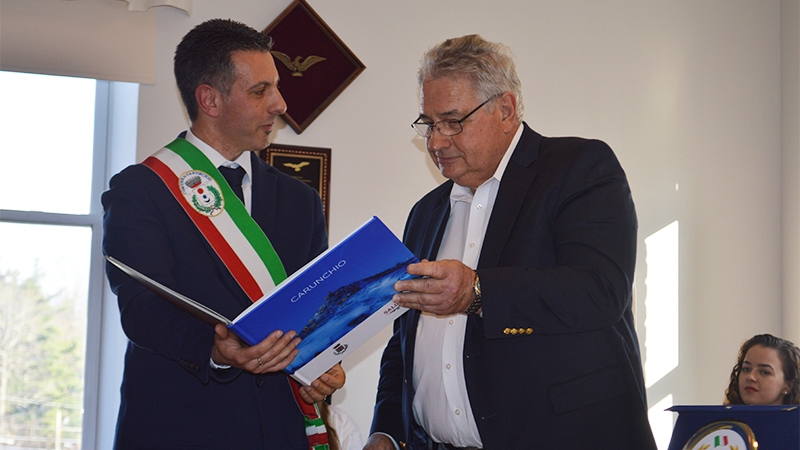 A coffee table style book, filled with colorful photos of their town, is one of the gifts Italian Mayor Gianfranco D’Isabella presented Saluda Mayor Fred Baisden during the special meeting of the city commissioners on Tuesday. D’Isabella, mayor of Carunchio, Saluda’s Italian sister city, is visiting the mountain town this week, along with his wife, Paola. The two were officially welcomed to North Carolina during Tuesday’s ceremony. (Photo by Catherine Hunter)

During a special called meeting of the Saluda City Commission, D’Isabella presented Saluda Mayor Fred Baisden with a plaque representing 33 towns in the region where Carunchio is located on the Adriatic side of Italy.

Other gifts included a bell that is used to ring at the beginning and closing of the town’s meetings, a calendar of pictures from the area, postcards, an apron featuring the Ventricina Sausage logo and a colorful coffee table book with photos of the Abruzzo province where Carunchio is located.

Speaking through an interpreter, Cristina Criscio, D’Isabella announced that, during the year 2018, they will display Saluda’s city logo with the symbol of Carunchio.

“We’re hoping to begin a student exchange program,” Baisden said. “They also want to get some ideas for promoting small businesses, similar to those in Polk and Henderson counties.”

The Italian delegation arrived Monday evening, after flying into Atlanta. They are staying at the Oaks Bed and Breakfast and the Orchard Inn in Saluda. Their itinerary includes a tour of Saluda, a meeting with Saluda Elementary Principal Cari Maneen, tours of area agricultural businesses, such as wineries and greenhouse farms, and tours of commercial businesses. Other events include a tour of the Tryon International Equestrian Center, a meeting with Hendersonville Mayor Barbara Volk and a meeting with the Polk County Economic Development Group.

Saturday will give them a chance to enjoy the area’s beauty, as they have opportunities to  tour Lake Lure, the DuPont Forest waterfalls, Chimney Rock, the Biltmore House, or to try rafting or a hike to Pearson Falls or Little Bradley Falls. Of course, the guests will have opportunities for shopping and enjoying lots of traditional Southern food and music throughout the week.

“We are looking for things that might bond these two towns,” D’Isabella said.

“We also want to promote our famous Italian cooking school, Abruzzo Cibus,” said Criscio, the  owner of the school. Criscio said the school is designed for teaching Americans who wish to learn Italian cooking from Italians, and spend a wonderful week in Italy.