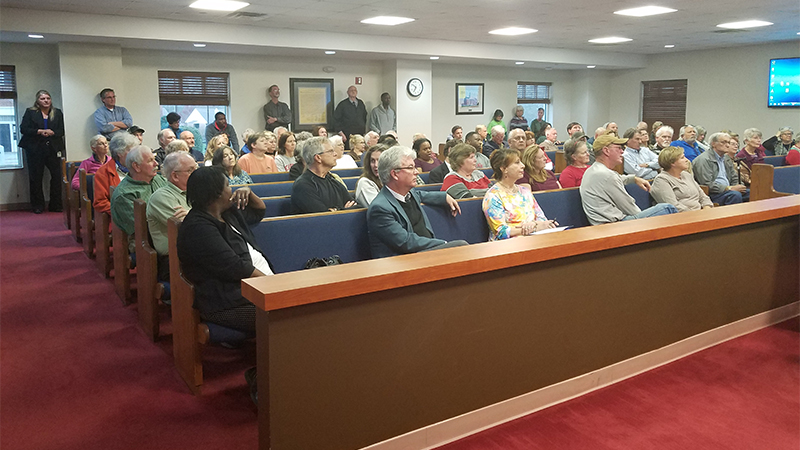 It was standing room only inside the chambers of the Polk County Board of Commissioners Monday, as the members of the audience sounded off about TIEC’s recent request to rezone 40 acres of its property. (Photo by Leah Justice)

Packed house sounds off during hearing

COLUMBUS — Polk County residents and officials with the Tryon International Equestrian Center will have to wait almost a month to know if the center’s recent requests for zoning changes will be approved or not by the county board of commissioners.

The commissioners met Monday and held a public hearing for TIEC’s zoning change requests, which were to rezone almost 40 acres of the property. Some of the changes included changing much of the zoning to Equestrian Village District, which allows up to 60-foot buildings and no limit on the amount of rooms a hotel can have.

The meeting was standing room only, with most of the comments during the public hearing being against the zoning change.

During the agenda adoption, commissioners approved delaying the vote until the county’s April 16 meeting.

Some of the zoning changes requested by TIEC include to add uses for a chapel, a quarantine facility, schools and veterinary clinics.

Becky Oliver said during the hearing that she has lived in the area for 57 years, and TIEC keeps asking for more and more and more.

“When I moved to this area, I moved because it was small and meant to stay small,” said Oliver. “I like Columbus the way it is.”

She said TIEC said they would help build “our county,” but all they are building right now is “their county.”

“We keep doling out more and more,” Oliver said. “When are you going to stop?”

Michael DeVere said he is concerned with 60-foot height limits, and said he would not necessarily want such a structure near his property line.

“I wouldn’t want people from the sixth floor looking down in my bedroom,” DeVere said.

DeVere also requested the county restrict TIEC’s flagpoles, as they have two with huge lights. He said TIEC has contributed to the areas’ light and noise pollution, trash along the highway, as well as speed being an issue.

“This development is really impacting what we call our home, our neighborhood,” DeVere said. “My taxes went up significantly because of all this. They came in saying they would maintain the country feel, and I’m not seeing it.”

Grey Lancaster brought in models he made to show what can be done in terms of building height.

TIEC Chief Operating Officer and Vice President Carolinas Operations Sharon Decker answered some of the questions brought up by the public.

Decker said TIEC has no interest in starting its own school. She said TIEC wants to provide tutoring classes to students, and that TIEC is very pleased with Polk County Schools.

She also said TIEC does want a chapel on the property.

Decker also said TIEC has offered a 2-acre site to the county for an emergency service building, with surveys being done now.

She said TIEC has a foundation permit for a hotel that is under construction, but “nobody is letting us build anything in this county without appropriate permits.”

County engineer Dave Odom also ensured commissioners TIEC has appropriate water and sewer services for both the facility in general and the upcoming World Equestrian Games.

Decker was then asked to review TIEC’s emergency plan for WEG. Decker said there is a 55-page plan, and asked to come back during a May county meeting to present what they could of the plan.

Some of the plan is not for public view, for security reasons.

Decker said the document has evacuation plans for major storm or events, continuous search for hazardous materials — anything that would create a problem. She said the games will have metal detectors and will operate on a clear bag only policy.

She said the plan deals with human and equine safety, and any type of emergency response as well as a traffic plan. She said the plan is to keep all primary traffic on the major thoroughfares.

She also said for WEG, additional personnel will be brought in to ensure Polk County’s emergency services are not interrupted.

Decker then spoke to another question about residents not wanting sprawl as far as hotels and construction is concerned at the center. She said TIEC has tried to address those concerns and are trying to keep all the hotels along the exits of U.S. 74 and concentrated in those areas.