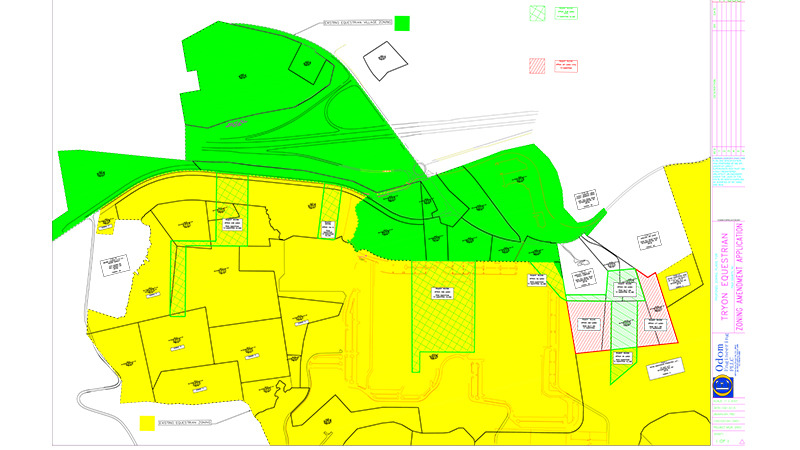 The Polk County Board of Commissioners is holding a public hearing at 6:30 p.m. Monday to hear comments regarding the Tryon International Equestrian Center request to rezone approximately 40 acres of its property. Pictured is a map of the proposed rezoning areas — cross-marked areas are the locations where TIEC officials are requesting changes. (Submitted graphic)

COLUMBUS — Residents will have the opportunity on Monday to comment on the Tryon International Equestrian Center’s recent request to change the zoning of about 40 acres of the facility’s property.

The new zoning, if approved, could allow higher building heights in some areas, and an unlimited amount of hotel rooms. The Polk County Board of Commissioners scheduled a public hearing for 6:30 p.m. Monday in the R. Jay Foster Hall of Justice, located in the Womack building in Columbus.

TIEC is also requesting the county designate the uses of veterinary clinics, churches, synagogues, temples or other religious buildings, quarantine facilities, schools (public or private) and schools (vocational, business or special schools) as permitted in both Equestrian and Equestrian Village Districts.

If approved, the county’s definitions will be amended to add that a quarantine facility is a facility at which animals regulated by local, state or federal agencies are restricted and tested prior to being permitted to enter into the general population.

Commissioner Tommy Melton asked county planner Cathy Ruth if the planning board had any concerns with TIEC’s requests.

Ruth said it was a unanimous vote to recommend approval from the planning board. She does not recall specifics, but-the board did have a lot of questions.

Commissioner Ray Gasperson asked what the difference is in the allowable height of buildings in the Equestrian and Equestrian Village Districts.

Gasperson asked how many hotel rooms could be built in the Equestrian Village District.

Ruth said there is no limit on the number of rooms the hotels can have in the Equestrian Village District.

The Equestrian District has a limit of 450 rooms.

Gasperson said it is hard to believe next month will be five years since the county started a development agreement with TIEC. He said the big note for him is that anything that is zoned Equestrian Village has the potential of no limit on hotel rooms and 60-foot high buildings.

Gasperson asked that the county line up experts for the public hearing to give the county opinions, saying there are some questions that must be answered in order for the county to provide services for a high impact event center such as TIEC.

Gasperson asked if there are public facilities and services that exist or are planned that can reasonably provide the needs that will likely occur if this zoning request is approved, what level of services can currently be provided, what capital improvement plans should the county anticipate and how will those be paid for.

Gasperson suggested that experts on water and sewer, law enforcement, EMS, fire service and emergency management, and other topics be present at the public hearing.

“I think it’s vital prior to this vote,” Gasperson said. “We want to see you very successful. We just need to make sure we have all our ducks in a row.”

Decker responded that, as commissioners are aware of, TIEC has agreed to provide 2 acres of land and $250,000 for an emergency facility near the property.

Gasperson said the reality is that 2 acres and $250,000 will provide a building that will hold a couple of fire trucks.

“I don’t think that’s anywhere near the needs for your facility,” he said.

Decker said grants are available for these type facilities.

Commissioners agreed to place capital needs as a separate agenda item for Monday’s meeting, prior to the vote on the rezoning requests.

Decker said TIEC has a backup water supply that was already on the property, which is a 500-gallon per minute well.

“The capacity is there, and the water treatment option is there,” Decker said.

Decker said TIEC wants to straighten out a line on one of the rezoning requests and shave off about 4 acres to be rezoned, which will reduce the acreage in the Equestrian Village District.

Commissioners will decide on TIEC’s requested amendment to the amount of acreage to be rezoned on Monday.