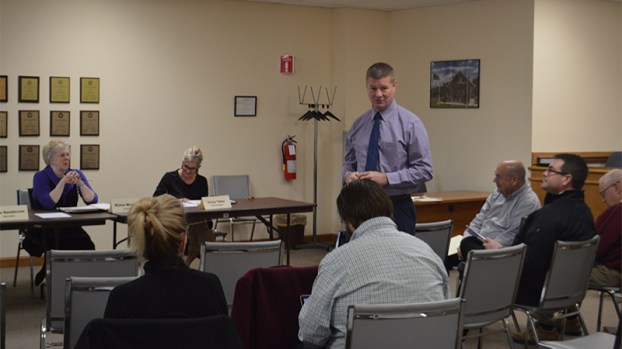 During the introductions of new members section of the March LABA meeting, financial adviser Greg Walker announced that he was opening a new Edward Jones Investment office on East Rutherford Street. (Photo by Catherine Hunter)

LANDRUM — Restrooms, signage and coverage area were the topics at the Landrum Area Business Association meeting this week.

The LABA board reported back to members regarding their efforts to increase membership and involvement in the association.

“How far do we want the Landrum business area to go?” asked LABA president Diana Winkler.

Winkler said secretary Ellen Henderson met with three businesses on the town’s perimeter, while she herself met with businesses in the second block downtown between Landrum Hardware and Organic Works.

“They [businesses on the second block] said they felt like everything the city does is focused on the first block,” Winkler said. “They asked if there are any plans for public restrooms on their end of town.”

During the restroom discussion, Landrum City Administrator Rich Caplan said there were no plans for additional public restrooms at this time. He added that the location of the restrooms that are in the works is because the property owner is allowing the use of the property for that purpose.

“We’re fortunate with the Collective, because we have a cooperative landowner,” said Caplan.

“There are very few towns that provide numerous bathrooms for a town our size,” said Patty Otto, owner of the Hare and Hound Pub.

Other comments included a discussion about signage.

Christi Stanton, owner of Réalta School of Irish Dance located behind Landrum Hardware, said it was often difficult for new students to find her location.

“The GPS still takes people to Perry’s,” she said.

Stanton also suggested that the alleyway behind the hardware store could be developed as a special section of town to attract tourists.

“That area could be so cool, like the little alleys that are in Charleston,” she said.

The LABA board and members also discussed printing LABA decals for doors and windows of member businesses,  and having a short informative presentation at each of their meetings. Members also announced approval of a $25 membership fee for new businesses and civic-minded individuals in the Landrum area.