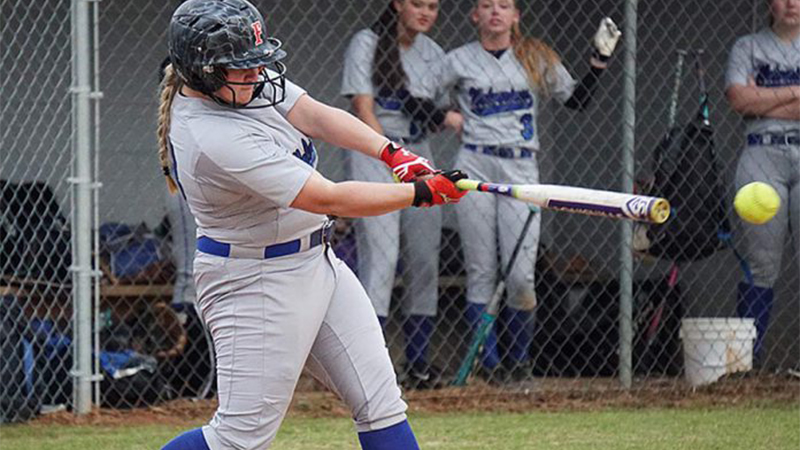 Polk County’s Karli Wood finished 1-for-2 with an RBI in Monday’s win. (Photo submitted by PolkSports.com)

In her first game in two years, Ansley Lynch provided it.

Lynch’s two-out, two-run single in the bottom of the fourth keyed a six-run rally, setting the stage for the Wolverines’ 14-4 win over Avery in the season and Western Highlands Conference opener for both teams.

Avery pushed across three runs in the second inning and another in the third to hold a 4-0 lead before the Wolverines pushed across a run in their half of the third.

Then Polk seized control of the game.

Autumn Owen walked to open the bottom of the fourth – Avery opted to walk Owen in all of her five at-bats – and Karli Wood was hit by a pitch to give Polk a pair of baserunners. Two outs later, they were still there before Lynch, in her first game after missing last season due to an injury, laced a base hit to drive in both.

A pair of Avery errors led to two more runs and preceded RBI singles by Haley Fowler and Maranda Gosnell that gave Polk a 7-2 lead.

“Really glad to have Ansley Lynch back. That was a huge at-bat,” said Polk County head coach Jamie Thompson. “Two outs, runners on second and third and we’re down 4-1. She puts the bat on the ball and we score two runs and from then on we were rolling.

“That was a game-changing moment.”

The Wolverines extended the margin with two runs in the fifth as Allie Thompson singled, Lynch was hit by a pitch and Anna McFadden walked to load the bases. Fowler drew a walk to force home one run, and a Gosnell ground ball brought home another.

Polk then closed out the win in the sixth with a five-run rally, a combination of Avery errors, walks and hit batters leading to four of the runs before Wood ripped a single down the third-base line to drive in the final run.

“We had a slow start, and we still didn’t hit the ball as well as I think we’re capable of,” Thompson said. “But we put the bat on the ball enough and made them make some plays. They fumbled it around a little bit, but we did the same thing in the second inning and gave them some runs.”

With four-year starter Ashley Scruggs and her 66 career wins having graduated, the victory also marked the debut of Fowler as Polk County’s starting pitcher. The senior had eight strikeouts and allowed five hits.

“Haley’s got some speed,” Thompson said. “She went six innings tonight, and hopefully her endurance builds up. She’s never had to pitch more than one or two innings before except for her sophomore year, when she pitched a game at Hendersonville (a five-inning win). She did real well.”

Lynch finished 2-for-2 with two RBI and scored three runs for Polk. Fowler helped herself at the plate, going 2-for-4 with three RBI.