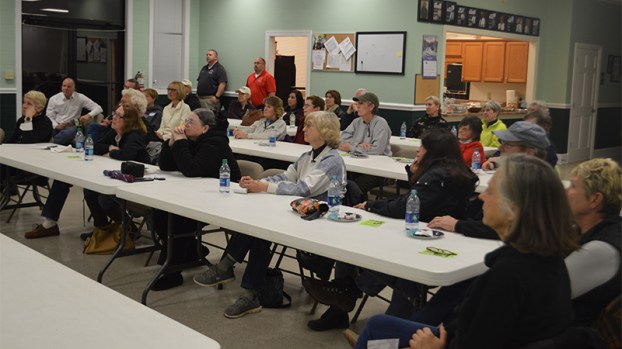 Approximately 25 horse owners came to Green Creek Fire and Rescue last Wednesday evening to learn about barn fire safety. The event was sponsored by PEER and Partnership with Horses. (Photo by Catherine Hunter)

Check your barn for fire safety

Polk Equine Emergency Rescue teamed up with Partnership for Horses to host the potluck. PEER Chief of Rescue Operations Anita Williamson said anyone calling for equine emergency rescue should call 911 and ask for Polk County.

“Ask for PEER,” she said. “Be sure to ask for Polk County, or you might get Spartanburg.”

Green Creek Fire Capt. Brent Jackson and Polk County Fire Marshal Bobby Arledge discussed ways in which horse owners can reduce fire risk in their barns. Jackson said some of the important points to consider are no smoking in barns, keeping shed rows and isles swept clean and knock down the cobwebs.

Jackson said smoke alarms are not always the best to use in barns because of the dust. He discussed different types of fire alarms and fire extinguishers.

“Create a fire break around your barn,” Jackson said. “Make sure there is at least a 50-foot clearance around your barn and house of leaves, etc. It will slow the fire down.”

Other tips included making sure the exits and isles were clear, storing hay and bedding in a separate building and being sure there was a halter and lead rope beside every occupied stall.

“Use a leather halter and a cotton lead,” said Jackson. “Nylon will melt very quickly.”

Jackson said space heaters were the number one cause for area house fires this year, and are often used in barns. He cautioned those attending the meeting to avoid using space heaters in their barns and, if used, never to leave them unattended.

Jackson added that other potential electrical causes of fires include leaving equipment such as clippers and radios plugged in, or using drop cords and extension cords — especially those not adequate or rated properly.

Jackson said the fire department would come out and inspect area barns at the owners’ request.

“We can’t enforce anything because it’s not a commercial business,” he said. “But we’ll be happy to come out and make suggestions.”

There will be a training for fire fighters and volunteers on how to handle nervous horses in extreme cases, such as a barn fire, at FENCE on March 24–25.

For more information or to volunteer to help PEER, contact Dianne Joyce at 828-894-3200 or email joycegroup@aol.com.