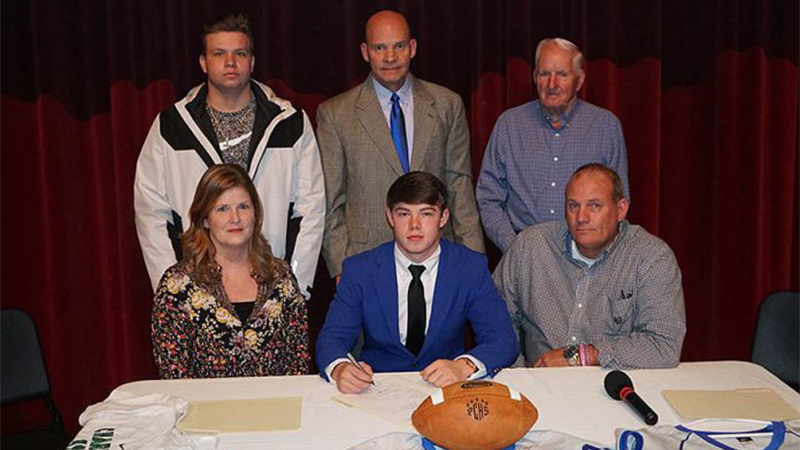 Dillon Knighton, front center, is flanked by Kathy Phipps and Jamie Phipps, with the back row, from left, including Chris Phipps, Polk County head football coach Bruce Ollis and James Stott. All were there to celebrate Knighton’s decision to play football at Brevard College. (Submitted photo)

It is a trait that personified Knighton throughout his Polk County career, and one he hopes will serve him well next season at Brevard College.

“It means a lot,” Knighton said. “This is something I’ve looked forward to doing ssince I was a little kid, so it’s a dream coming true.

“I’ve always been told I’m a slippery player and I don’t go down after contact, so I think I bring a good aspect of fighting for extra yards.”

The versatile Knighton finished his senior season with 15 catches for 164 yards and two scores, 117 yards rushing on 20 carries and a touchdown, 242 yards on punt returns, 201 yards on kickoff returns and 97 yards on interception returns. He had 40 tackles and two interceptions on defense and also served as Polk County’s long snapper on the Wolverine punt team.

“Dillon, I’ve always said he’s the kind of kid you want to jump in a foxhole with,” said Polk County head coach Bruce Ollis. “You can get back-to-back with him and fight off the enemy, so to speak.

Knighton will be the latest in a line of Polk County players who have continued their careers at Brevard. The list includes Polk County assistant coach Jordan Ollis, in the audience for Tuesday’s ceremony.

For Knighton, the chance to play college football grew out of his approach to his final year as a Wolverine.

“Senior year, it’s do or die, and you’ve got to leave everything on the field and play every play like it’s your last,” Knighton said.