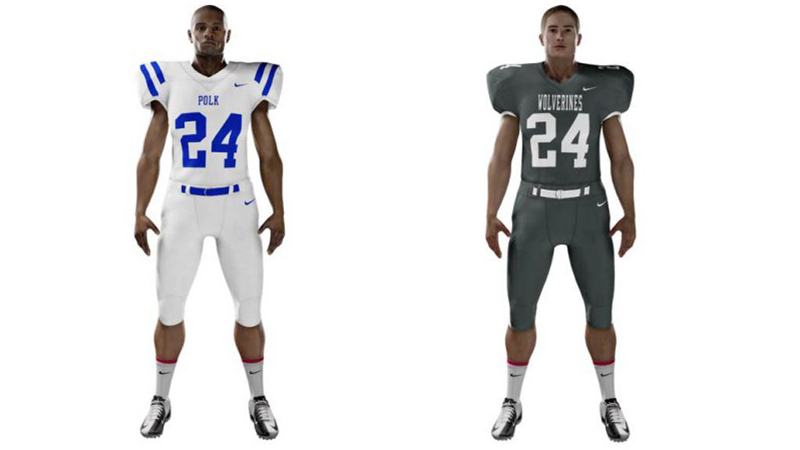 Renderings of Polk County’s new football uniforms for the 2018 season. The Wolverines are returning to Nike jerseys. (Art submitted by PolkSports.com)

Bruce Ollis has been spending a lot of his time since the end of the 2017 football season thinking about the future of Polk County’s football program.

Not just the 2018 season — still some six months away — but the upcoming year and beyond. Perhaps first and foremost, he would like to see the program’s numbers grow, which he thinks will not only aid the competitiveness of the Wolverines, but have a spillover effect for all Polk County athletic teams.

The effort is off to a good start.

“There are a lot of positive things going on,” Ollis said.

Start with Polk County’s offseason weight program, which has seen more than 70 potential players sign up for participation. Ollis is planning to add another rack to the school’s weight room in order to help serve the increased numbers.

“We’d certainly love to have that number going into the fall,” said the veteran head coach, entering the second season of his second stint at Polk County. “That’s certainly on our wish list.

“The offseason program is kind of a proving ground for us. The kids who will work hard in the weight room show that they’re willing to pay the upfront price for victory in our football program.”

Weight room time has not been limited to high school athletes; some of the Wolverine players are spending three days a week working with students from Polk County Middle School. That is part of Ollis’ key initiative for the spring, to have every member of the football program involved in something other than football.

“Our major goal for the spring is to have all of our players involved in a spring sport,” he said. “If a player is not playing a spring sport, then they’re going to be in the weight room helping our middle school football players. That has been great. It’s making our weight room a lot better.

“My biggest goal in the offseason is for each player to do something competitively. Competition is the driving factor behind us being successful. One thing people know is that Bruce Ollis is going to promote multi-sport athletes. We want our athletes to help all our sports, not just the football program.”

With Russell Athletic, who recently had outfitted Polk County’s football teams, ending its line of team athletic uniforms, Ollis has returned the Wolverines to Nike, where he took advantage of a buy one, get one deal to obtain new home and road uniforms.

“I jumped on that,” Ollis said.

Ollis has also been working to see more Wolverine items circulating at elementary schools in the district, as part of a new outreach program.

“I’ve been in touch with our elementary principals about setting up football clubs,” he said. “I’d like to go over to each school once a month and indoctrinate kids in some of the things we do. Just teach kids how to throw a ball, catch a ball, give them a Wolverine T-shirt. In this day and age, you have to sell your program. When you have a team and open the door, the kids just don’t flock in.”

Also helping shape the program’s future is an effort by supporters to launch a football booster club.

“We had the initial meeting last week of the Polk County Football Booster Club or whatever we’re going to call it,” Ollis said. “We haven’t named it yet. We’re trying to come up with a fancier name. I think that’s going to be a positive for our program and could be a model for other sports here.”