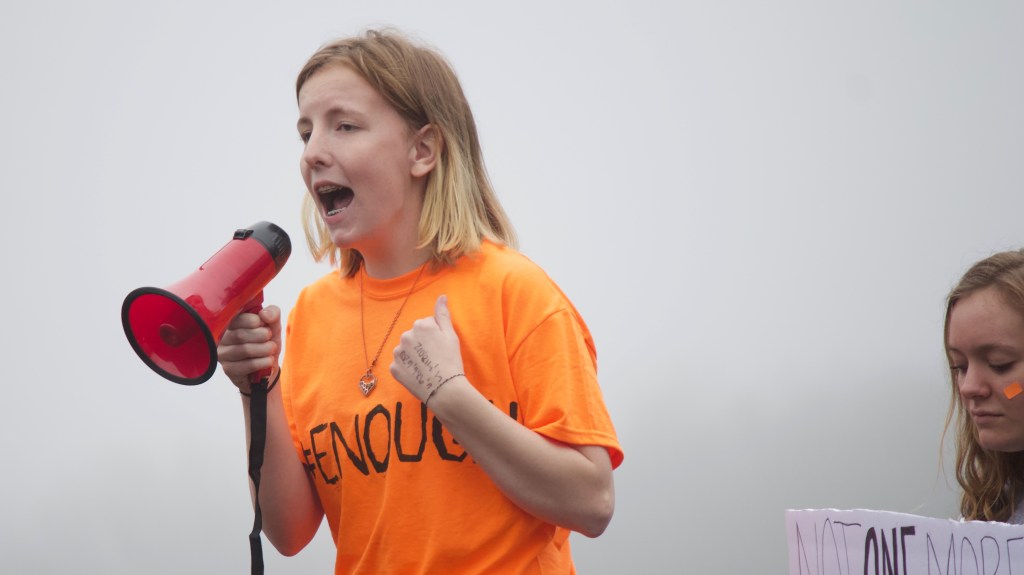 COLUMBUS — Below a drab, gray, overcast sky, a group of Polk County High School students —  many carrying signs with the names of the victims of last week’s shooting in Parkland, Florida — assembled outside the school grounds Tuesday with a clear message: “keep us safe.”

Wearing a bright orange T-shirt with the simple phrase “#ENOUGH” blazed across the front, senior Emily Hogan grasped a megaphone and proclaimed to the around 50 classmates behind her and the dozens of community members in front of her that the time for changes on how the country’s —and Polk County’s — leaders protect the next generation is now.

“Are you too naïve to think [a school shooting] can’t take place in Polk County?” Hogan asked the crowd. “It can. It happened in Parkland. It happened all over the United States. And it will keep happening, because Congress will not act.”

The group of Polk County students were among the many teenagers who are staging walkouts at their schools across the United States in response to the shooting nearly one week ago at Marjory Stoneman Douglas High School, which left 17 students and staff members dead.

Hogan, the president of the Polk County Association of Teen Democrats, and other speakers at Tuesday’s rally called for a number of reformations to the country’s gun control and mental health treatment policies, which they believe will help prevent tragedies like Parkland, Sandy Hook, Columbine and other school shootings that have been forever etched in public consciousness.

While directing most of her criticism toward lawmakers in Washington for not enacting stronger gun control legislation, Hogan also said that administrators with Polk County Schools could do more to ensure student safety.

“We need to protect Polk County,” Hogan said. “This is my home. This is where I will want to raise my children, if I choose to have them. This is where I love. I am in Polk County High School some days more than I am at my home, in my waking hours.”

Hogan helped organize Tuesday’s rally along with fellow Polk County senior Luke Collins, the executive vice president of the local teen Democrats chapter. Collins, who also spoke at the event, said he jumped at the chance to stage the walkout, as he believes that his and other voices of his generation are being ignored.

Collins said he was surprised to see the tremendous response to the rally from both his classmates and those from the community, as the social media posts he and others made to promote the event initially received a lukewarm reception.

“It’s hard for me to put into words, but to see the amount of support we are receiving as students is crazy,” Collins said.

Among those from the local community attending the rally was Tryon’s Mary Parker, who held up a sign during the student rally echoing the same message as Hogan: “#ENOUGH.” The retired educator said she came out to support the students, and was happy to see members of the younger generation step up to make their voices heard.

“I don’t think any of these issues are Democrat or Republican ones,” Parker said. “They are human issues. We are fighting for the soul of the country right now.” 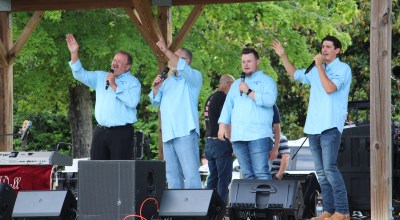 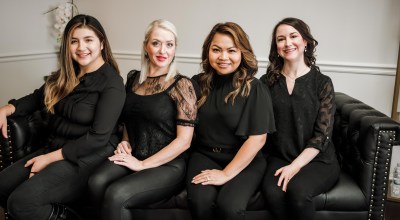 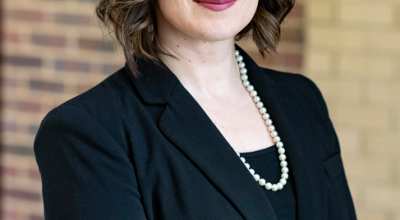