Elizabeth D. Landrum, age 97, of Tryon NC died Monday, February 6, 2018. Born in The Netherlands in 1920, she emigrated with her family to Canada in 1926 and received her education there. Emigrating a second time alone, she put herself through nursing school in Detroit MI and became a U.S. citizen in 1948. 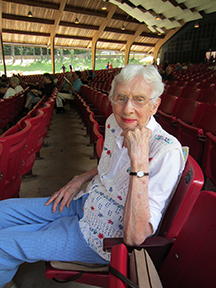 During her nursing career in Detroit, she cared for a terminally ill patient who owned a horse farm in Tryon. She accompanied this patient in a single-engine ambulance plane to Tryon in 1953. While there, she met John G. Landrum, Jr. in his office at Tryon Bank & Trust Company. He proposed five days after that chance encounter and they were married a year later in Canada. Daughter of the late Charles and Rita Sypersma Deinum, she was predeceased by her husband (1990), her three brothers, and her sister. Survivors are her daughter Rita E. Landrum of Tryon, son John G. Landrum, III of Greenville SC, and numerous beloved nieces and nephews.

Active in civic and social circles, she served on the boards of the Tryon Concert Association (founding board and charter member), Tryon Fine Arts Center, St. Luke’s Hospital Auxiliary, Lanier Library, Visiting Nurse Association, Tryon Painters and Sculptors (charter member), Tryon Arts and Crafts (charter member), Daffy Jills Garden Club (charter member), and the highly successful Brevard Music Center Association which she founded in 1979. She was also instrumental in organizing Friends of the Fine Arts Center in 1995. Mrs. Landrum had served on the educational awards committee of Polk County Community Foundation and remained active in the scholarship program at Brevard Music Center until the time of her death. Tryon Fine Arts Center placed her in Second Wind Hall of Fame in 1996. She was a charter member of the Community Chorus, in which she sang for many years, and a life member of both Polk County Historical Association and Tryon Country Club. Always active in her church, she served on numerous committees and was, for most of her life, a Sunday School teacher and a member of the choir. She was a longtime member of Tryon Presbyterian Church.

Services will be held at 2:00 p.m. on Friday, February 9, 2018 at Tryon Presbyterian Church with Rev. Tom Malone officiating.  Interment will be private. In lieu of flowers, memorials may be made to Tryon Fine Arts Center, Polk County Community Foundation, Lanier Library Association, Brevard Music Center, or a charity of one’s choice.