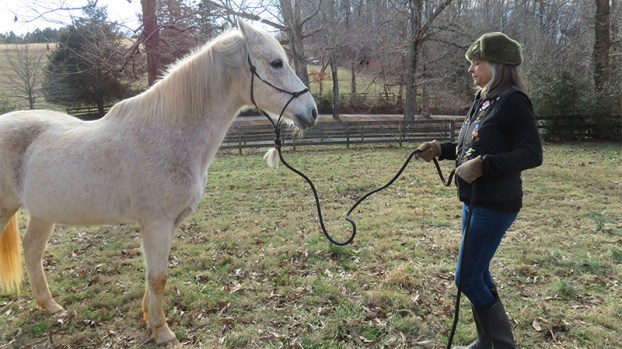 In the Carolina Foothills we’re fortunate to have a wide variety of clubs and organizations that can meet just about every equine interest. Many of these focus on a particular discipline but one of the newer groups takes a different approach. Rather than focusing on a specific sport or breed, Partnership With Horses is dedicated to spreading and practicing the horse training and care approach most widely known as Natural Horsemanship.

Partnership With Horses was started in 2015 by local friends and students of Natural Horsemanship, Arlene Lulavage and Elise Rogers. Elise claims Arlene is the “idea person” behind the group while she herself can “get things done” through her experience with technology, social media and design.

Partnership With Horses follows Natural Horsemanship as originally developed among ranching horsemen in the Northwestern United States. Tom Dorrance, an Oregon horseman of the “Buckaroo” tradition, is credited with creating Natural Horsemanship in 1960, relying on natural, gentle methods of horse training based on what he called “getting a feel of the horse.” Dorrance was a much-admired horseman and trainer but he didn’t particularly like media attention or giving clinics. When Idaho horseman Ray Hunt began training with him, Dorrance realized that Hunt had the skills to share the Natural Horsemanship approach with a much wider audience, to the benefit of horses and horsemen alike.

Hunt became the horse industry’s first traveling clinician and the leading practitioner of Natural Horsemanship from the 1960s until his death in 2009. He based his approach on four principals: 1) Make the wrong things hard and the right things easy; 2) Adjust to fit the situation; 3) Reward the slightest try; and 4) Do less to get more. He was known for starting each clinic by stating, “I’m here for the horse, to get him a better deal.”  That philosophy and his training methods have been carried on by Hunt’s students and followers, including Buck Brannaman, John Lyons, Monty Roberts and many others.

Arlene and Elise met while both were working on Natural Horsemanship with area horseman Paul Hellebrand, who has since become a mentor for the Partnership with Horses group. The women say that part of their motivation for starting the group was the announcement of the development of Tryon International Equestrian Center. “We wanted to offer horse people in the area an alternative approach to riding as a way to balance out an emphasis on the competitive world, which we believe is too dependent on bits, whips, spurs and harsh discipline,” Elise explains.

The Partnership With Horses Approach

The motto of Partnership With Horses is, “It’s All About the Horse.” The group focuses on “Respectful Horsemanship” with the mission of promoting the physical and mental well-being of horses, and all methods of Natural Horsemanship are welcomed. The group’s goals are to network; support local instructors, vets, horsemanship clinics and riding events; and share information on how to develop a mutual respect with horses through listening, understanding and communicating using the least amount of interference, without forced submission or fear.

Partnership With Horses meets six times a year, on the second Wednesday of February, March, April September, October and November, usually at the Green Creek Fire Department building on Highway 9. Meetings have a guest speaker and time to network beforehand, with topics including relationships with your horse, riding skills, safety, and care of the horse. One meeting now being planned is on the topic of barn fires and safety precautions, with help from local firefighters. Watch for more information.

Meetings attract up to 40 members, and upcoming dates and topics can be found on the Partnership With Horses Facebook page. The group also has nearly 300 online members from across the country who follow them on Facebook and share experiences and advice.

As Partnership With Horses enters its fourth year, Arlene – who is also an equine assisted therapy professional – has another project in the works: a book entitled “Essence of Equine Partnership Through Feel.” It starts with how human and horse brains are “wired differently” both physically and mentally, and how that affects communication. We’ll keep you posted on its progress.

Meanwhile, please enjoy the “Pearls of Wisdom” from the man most responsible for the success of the Natural Horsemanship approach, the late Ray Hunt.

Pearls of Wisdom from Ray Hunt*

• “Notice the smallest changes and the slightest tries.”

• “Direct the life in the horse’s body through the legs to the feet to the mind.”

• “Slow down so you can hurry up. In the end it’s a good way. Speed ahead of accuracy is no good.”

• “You think you’ve got to hold the horse but you don’t have too. You’ve got to have a feel – a feel following a feel, not pressure against pressure.

• “There has to be firmness and discipline. I’m responsible for running the show, and the horse is going to work for me. He’s going to go where I want him, but he’s not a slave. You make him want to do it. First thing you know, he’s your partner.”

• “If I was going to dance with a lady, I wouldn’t just grab her and say, ‘We’re going.’ I’d get slapped. A lot of people don’t understand that you are trying to get the horse to turn loose in the same way. There’s a place in there where he turns loose and then you give. I feel of him, I feel for him, and we both feel together.

• “I’m trying to get my idea to become the horse’s idea. It’s not like turning a dial that is going to work today. It’s what led up to today that you need to change. It’s the little things that make the difference.

• “Keep in mind what you are working toward. You might not get him in the starting gate today, but when you feel he tries – which is a plus toward that – you can put him away. Quit on pluses, don’t quit on minuses.

• That’s negative; always quit on positives. He will never forget it. Build on positive things. When he finally wants to do things for you, that’s building confidence in him. By doing too much, you can take that confidence out. You’ve got to work from the horse’s point of view.”

* These tips were shared by Ray Hunt at a gate-training clinic at New Mexico’s Sunland Park Racetrack, and excerpted in

the May and June 2002 issues of “The America Quarter Horse Racing Journal.”

Bring in the cavalry

Imagine riding a dressage test using only one hand on the reins, shooting a pistol while jumping or spearing a... read more