Alert for asteroids at Lanier Library 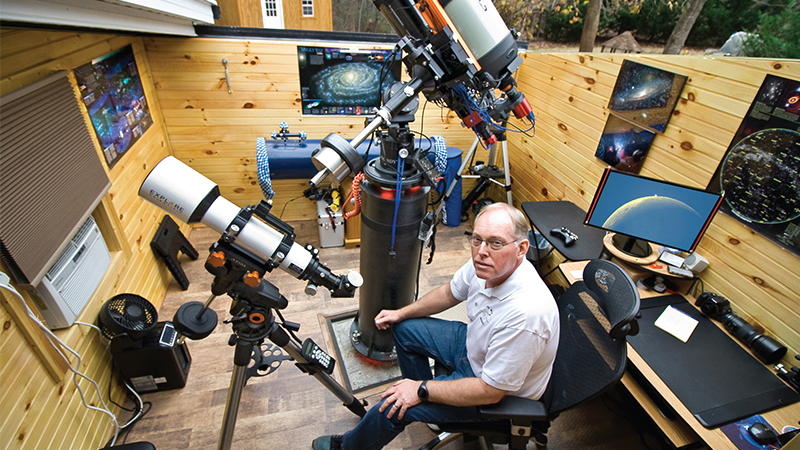 Randy Flynn focuses into the stars for an average of two hours a night, or five hours when it’s really clear. Either way, that probably does not factor in daylight possibilities. The Venus Occultation on the monitor behind him was photographed during a lunch break.

Randy Flynn, owner/operator of the Squirrel Valley Observatory in Columbus, has been watching the heavens since about the time Neil Armstrong took his “giant leap for mankind.” This award-winning astronomer will be at Live@Lanier, Thursday, Feb. 8 at 6 p.m. with his deep space images and astronomical stories including the latest near miss.

His observatory is only one of 1,972 observatories worldwide to have a Minor Planet Center IAU W34 observatory code for the detection, observation and tracking of hazardous asteroids.

Of the millions of space rocks out there, only 15,000 are known and tracked as NEO’s (Near Earth Objects), all exceeding the speed of practical comprehension. The question is not “if” but when, how big, how fast, and exactly where one of the unknowns will strike.

But, there’s no reason for you to concern yourself with troubling probabilities. You can simply go outside on a pleasant night and enjoy the star show for as long and as leisurely as you want with no urgency to watch and wait. Randy has been doing that for you.

“I had five asteroids in my initial W34 submission, which included 138 single point observations. I had to show consistency and accuracy of data within one arc second of error,” says Randy. That’s 1/3600 of a degree, and of his 138 measurements, only four were out of spec.

As further recognition, the European Union’s NEOShield project selected his 5143 Heracles Asteroid images and data as one of three winners in the International Capture the Asteroid Contest.

He has also been collaborating with the Swedish Meteor Network on testing camera software. In his future is exoplanet photometry, supernova detection, discovering a comet to name, and establishing a remote control center for students of all ages who want to learn about the skies above the Foothills.