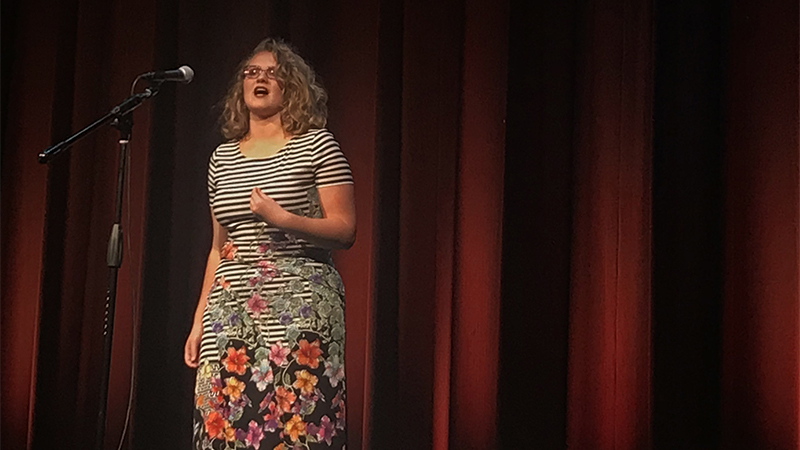 High school students in Polk County are used to competing. Polk County schools are ranked second in the state for academics, and they’re known for their prowess competing in track and field, football, volleyball, and more. Now, they’re competing on a national playing field with…poetry!

Students in Ms. Heather Wright’s English classes at Polk County Early College are participating in the nationwide Poetry Out Loud program, learning about great poetry with the added fun of competitive recitations.

Since 2005, Poetry Out Loud has grown to reach more than 3 million students and 50,000 teachers from 10,000 schools in every state, Washington, D.C., the US Virgin Islands and Puerto Rico. Poetry Out Loud uses a pyramid structure that starts at the classroom level. Winners advance to a school-wide competition, then to a state competition, and ultimately to the National Finals. This program helps students master public speaking skills, build self-confidence, and learn about literary history and contemporary life.

“Poetry Out Loud is a national program promoted by the NC Arts Council,” explained Marianne Carruth, TFAC executive director. “It was suggested to me by TFAC’s NC Arts Council contacts to support the school in this program.  I presented it to Mrs. Ronette Dill as a way TFAC could partner with the schools. Ms. Wright had already heard about the program and this was the encouragement she needed to take it on.”

“I think that Poetry Out Loud has been incredibly beneficial for my students,” said Ms. Wright, also the district coordinator for the new initiative. “The program requires students to dig into poetry and see what it means, what it sounds like, and how it feels. Poetry is just one of those amazing things that creates bridges between cultures, generations, and lives. It’s a uniting force and that is always a beautiful thing.”

Local students seemed to agree, with nearly a dozen PCEC 9th through 12th graders participating in the classroom level of the tiered competition.

“Poetry has always been a part of my life, but this was something I have never done before. I started to watch others perform poetry, acting as vessels for the poets. It was magical. I wanted to do that, too,” said competitor Jillian Snyder, a junior at PCEC.

Students selected poems that spoke to them personally and—with a little ‘acting’ coaching from Tryon Fine Arts Center staff—recited them for a panel of local educators and poetry enthusiasts. Judges Beth McCallister, Ronette Dill, Marianne Carruth, and Lanier Library Executive Director Amber Keeran analyzed the recitations for accuracy, dramatic appropriateness, articulation, and students’ understanding. Six of the top recitations made it to the school-wide level, held at TFAC in early December.

“Poetry isn’t as hard to perform as I originally thought,” said Sadie Rogers, the runner-up from the school level contest. “It actually was quite fun and exhilarating to stand on the stage, with only myself and a microphone and the poems I practiced. I also learned that poetry is not just rhyming words on a piece of paper, but rather a story and feelings from a person.”

Matt said his win was unexpected, but he was excited to “share something with my community. I wanted to be able to take something, like a poem, that spoke to me and be able to iterate that back to others in hopes of it speaking to them as well.”

Matt now moves on to the district competition, and will face off with a representative from Polk County High School this winter. The winner of the district contest will compete in the state Poetry Out Loud finals in Greensboro in March of 2018. Support from TFAC and Lanier Library will cover travel costs for the student and chaperone to represent Polk County at the state level — and potentially on the national stage.

It’s an auspicious start to a new educational initiative. “The reception of the program has been phenomenal at the Early College,” said Ms. Wright. “We hope to have another group of participants next year!”

For more information on the Poetry Out Loud competition, and TFAC’s Arts in Education programs, contact Marianne Carruth at 828-859-8322 or marianne@tryonarts.org.