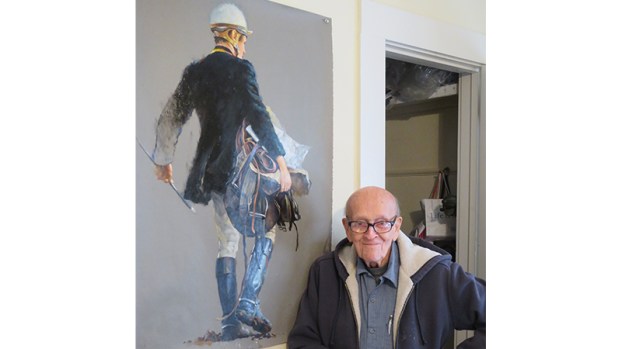 Charles Harpt at home in Tryon.

The day Charles Harpt got to ride his first horse was also the day he got his first speeding ticket. Not on the way to or from the stables, mind you, but while he was actually on the horse.

“Charlie” had been fascinated by horses since first watching them pull delivery wagons on the streets of Philadelphia, where he grew up in the 1930s and ’40s. “Any time I didn’t have school I would sit on the step and watch the delivery horses, study the harnesses, wonder why they were made the way they were. Some of the delivery guys were very nice and would show me how they worked, let me pet the horses and let me put their feed bags on,” he recalls. He remembers hoping that the workhorses had someplace to go with grass and water at the end of the day, where they could be just horses, not workhorses.

Charlie didn’t get his first ride until late in high school when he heard a group of classmates talking on a Monday morning about the fun they’d had at a riding stable over the weekend. He was invited along the next time but was warned not to tell the stable owners it was his first time, “or we’d all be given the old nags.”

Charlie was a small boy and was given a small horse. “When I put my leg across that little body and sat down in that saddle, it felt so comfortable. I had day-dreamed all the time, seen horses in the movies, but never thought about really getting on a horse,” he says. “I remember thinking, ‘I hope this turns out good because I really like it.’”

One thing Charlie didn’t like was that the other guys talked the whole time, so he kept dropping back so he could hear his horse’s hoof beats.

“At the end of the ride, the guys had gone one way and my pony went the other way. He kept going faster and soon was running for home. I was trying to stop him until I realized, ‘Charlie, this is what you’ve always wanted to do!’ So, I let the horse run until we went into a park where a cop made me stop and gave me a ticket – a speeding ticket on a horse!”

Charlie had to go to City Hall with his mom, where he explained to the judge that the horse had taken off for home. His defense was weakened somewhat when the policeman said he’d seen Charlie raise his arm and yell “Charge!” But his case still got dismissed.

That was his only riding experience for a long while as he was nearing graduation and, like most young men at the time, was headed into the service. He graduated in 1945, when WW II was ending, but new recruits were needed overseas so the war’s veterans could come home.

Charlie signed up for a three-year hitch and learned that a list was being made for men to go to the Cavalry Training School in Fort Riley, Kansas. “I couldn’t let that go by – they had horses!” It took some persistence but Charlie did manage to get assigned to Fort Riley, where he was one of the last soldiers to be trained for the cavalry.

“I loved the army, it was like boys’ camp with guns,” he remembers. “I liked it because I was learning something. When I was in regular school, I wasn’t there to learn something, I was there because of the truant officer. But at Fort Riley we got to learn how to use weapons and took turns leading the charge to destroy a mock village called ‘Little Tokyo.’ It was like an obstacle course – we crawled through this, climbed over that, I was in my glory rather than sitting in a classroom.” After basic training Charlie spent the bulk of his service as part of the Allied Occupation Forces in West Germany.

The Army was not Charlie’s only military experience. He had joined the Army to do his part for the country, but he later enlisted in the Air Force because he needed a job. “And with the GI Bill I could get an education that I could never have afforded otherwise,” he says.

Charlie had taken a break from horses while in the military but continued his other longtime hobby, which was art. “I had always drawn and used to get into trouble at school for sketching in my textbooks,” he remembers.  “In the military, I got into painting more and decided to go to college to study art.” He used the GI Bill to go to the Pennsylvania Academy of the Fine Arts, founded in 1805 as the United States’ first museum and school of art. While there he was awarded the prestigious William Emlen Cresson Traveling Scholarship for travel and study in Europe, which allowed him to spend months studying and painting in the British Isles and Scotland.

When Charlie returned home and graduated, he started his civilian career as an artist in the outdoor advertising industry – back when the illustrations were actually painted by hand. He remained in the business until retiring in 1989. He also continued his fine art paintings, garnering acceptance into such juried shows as Cartwrights Equestrian Gallery, American Academy of Equine Art, and The Sporting Art Exhibit in honor of the 50th running of the Block House Steeplechase, as well as numerous awards and accolades over the years.

Charlie had found his way back to horses – and eventually to Tryon – through his annual visits to Florida, where his parents had retired. One year he was looking for something to photograph with his new camera and his father suggested he go to a combination yachting and equestrian club in Tampa Bay. It was Charlie’s first introduction to the English riding disciplines and he found himself reconnecting with his horse gene. He later retired to Florida himself, where he took riding lessons but discovered that Florida wasn’t his cup of tea. He learned about Tryon through an article in a horse magazine and decided to come spend a week here.

He stayed at a nice hotel in Tryon next to the theater and a museum, where there was a showing of horse art. He was able to meet several artists, including one who had attended the same school he did. He realized he had found his new home, first renting an apartment, then a cabin for a few years, before buying a small stone house tucked in Tryon’s Hidden Hills. His sister, Betty, joined him in Tryon early on.

One of the first horse people Charlie met in Tryon was trainer Jeannie Smith, at a Harmon Field horse show. Over the years he has taken lessons with Jeannie, with Gerald Pack, and with Katie Maxwell. Taking lessons kept him in the horse world; he never had a horse of his own because he couldn’t afford a place to keep one at home, which is the only way he would have wanted to do it.

At the age of 90 Charlie no longer rides and no longer paints in oils. But he’s keeping his hand in art with a recent pursuit of pencil sketches. He was also talked into getting a computer to stay in touch with trainer-turned-longtime-friend Katie Maxwell and her family, now in Bluffton, S.C., and found that having a computer led him to another new pursuit – writing. He’s almost finished writing a book about a family who emigrated to America from Prussia in the 1860s. It’s based in part on the experiences of his own Prussian ancestors but is not their actual history. With the book nearly done, Charlie will soon be looking into the editing and publishing steps.

While I only met Charlie recently, I first saw some of his paintings about 15 years ago when local equine artists often had their works displayed at the Hungry Fox Restaurant between Tryon and Landrum. What drew me to Charlie’s art was how it captured more than just the beauty or athleticism of the horse – it captured the relationships between horses and their people. That ability must come from the heart and, I believe, dates back to Charlie’s earliest interactions with the drivers and workhorses of Philadelphia.

When I was interviewing him for this article, Charlie showed me some of his collection of small, finely detailed metal horses that he’d gathered or been gifted over the years. Many are handsome, regal, colorful and beautifully tacked, like the showy one from the Royal Scot’s Greys Cavalry unit, the same kind he’d once had on a childhood Christmas stocking. But his favorite, he told me, was an untacked brown horse, not showy at all, which came with a separate model of an equally un-showy man. And when you move the two statuettes together you see that the man’s hand is holding a small mound of feed that fits perfectly under the horse’s mouth. •