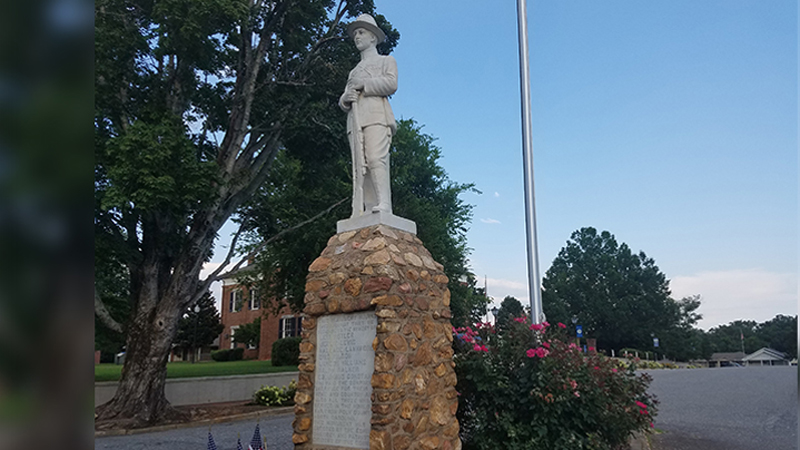 Editor’s Note: Over the next few days, we will publish our annual look back at some of the top stories, newsmakers and images that shaped the year.

The Polk County Board of Commissioners charged its appearance commission to investigate who owns the Doughboy statue in Columbus and what can be done to restore the statue. The Doughboy statue sits at the entrance of Courthouse Street and was dedicated in 1925 by the school children and the patriotic citizens of Polk County to recognize Polk residents killed in WWI.

Polk to send letter to N.C. House for voting down HB 581

The Polk County Board of Commissioners approved a resolution to thank state representatives for opposing House Bill 581 recently that would have changed laws for billboards.

Former Polk County EMS employee Michael David Purdy, 31, filed an appeal after being convicted earlier this month of resisting a public officer in a dog mutilation case. Purdy was convicted of one count of resisting public officer during Polk County District Court on July 12. Purdy filed an appeal on July 21, according to court records. The court date set for the appeal is Aug. 23.

The Landrum Police Department is warning the community to be careful when hiring people to do work or purchasing items through social media.

The Town of Columbus agreed last week to place a plaque at the Doughboy statue near the courthouse explaining why there is a 48-star flag flying there instead of a 50-star flag.

A former Spartanburg County sheriff’s deputy was cleared recently in the fatal shooting of Landrum resident Alexis George Mishtowt. Mishtowt, 63, of 325 Bird Mountain Road, Landrum, died of multiple gunshot wounds on July 1, 2016 after he was shot by deputy James Shehan.

The City of Landrum should soon have restrooms available to the public during office hours at 110 N. Trade Avenue. Landrum City Council approved a lease agreement with Vita Nova LLC during the city’s July 11 meeting. Landrum approved the lease for $1 per year and plans to renovate the restrooms. The restrooms are located in the multi-business building along N. Trade Avenue downtown. 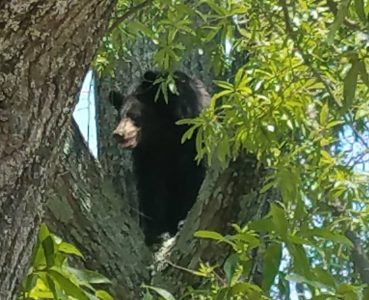 On the hottest day of the month at 94 degrees, a bear spent a day and night in a tree in downtown Landrum, causing traffic delays and creating a spectacle as the public tried to see it and take photographs. The bear was taken out of the tree by state and Landrum officials before 5 p.m. Saturday, July 22 after officials blocked off roads to try to keep the public out of the area.

The Polk County Sheriff’s Office arrested a Rutherford County man this week for trying to solicit a minor child for unlawful sex acts. Charles Donald Sweezy, 49, of Forest City, was arrested and charged by the sheriff’s office with solicitation of a child by computer or other electronic device, according to sheriff reports.

The boyfriend of a woman who was killed after he struck her with a rollback along U.S. 74 in April has been charged with second-degree murder. A Polk County grand jury indicted Edward Doyle Holden, 59, of 194 Emma’s Grove Rd., Fletcher and he turned himself in to the Polk County Sheriff’s Office on July 11 with a charge of second-degree murder, according to the sheriff’s office. 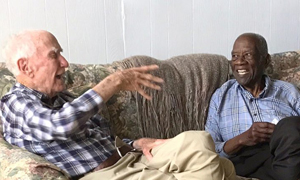 The Town of Tryon will be honoring two Citizens of the Year for 2017: lifelong residents James Payne and Jim Jackson. A public reception is planned for Tuesday, July 18 at 6 p.m. at the Tryon Movie Theatre.

A South Carolina man led the Columbus Police Department on two different chases in two stolen vehicles in the early morning hours of Friday, June 30 before being captured. Michael Travis Waddell, 23, of 33 Bridges Ave., Marietta, S.C. was arrested and charged by the Columbus Police Department with two counts of possessing a stolen vehicle, two counts of felony speeding to elude arrest, resisting a public officer, reckless driving, driving while license revoked and driving while impaired, according to police reports. 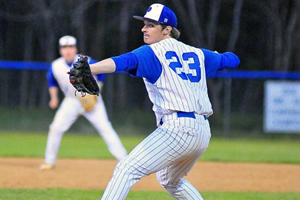 Polk County rising senior Holden Owens has been named to the All-Western North Carolina baseball squad as chosen by the Asheville Citizen-Times.

A Fountain Inn, S.C. man was sentenced to 15 years in prison this week after pleading guilty to two counts of reckless homicide after he wrecked into a motorcycle last year, killing two people. Harley Simms Beck, 43, pleaded guilty in Spartanburg County Court this week to two counts of reckless homicide instead of the original charges of felony driving under the influence resulting in death.

After researching the possibility of enacting its own ordinance to regulate the use of unmanned aircrafts, commonly known as drones, Saluda officials decided to enforce state laws that are already on the books.

The Saluda Board of Commissioners budgeted $100,000 this fiscal year to tackle some street and sidewalk repairs and heard an update on the plan recently.

A Polk County horse farm was ordered to be quarantined on Friday, Aug. 25 following a positive rabies case of a horse earlier this month. On Aug. 9, the Polk County Health Department was notified by the N.C. State Lab of Public Health of a positive rabies report of an equine in the area. On Friday, the North Carolina Department of Agriculture and Consumer Services, out of Raleigh, ordered that Terceira Farm, located at the corner of Red Fox Road and Hamilton Drive in the Columbus area, be quarantined.

The uncle of a 5-month-old baby, who was killed in 2015, pleaded guilty to voluntary manslaughter in Polk County District Court on Wednesday, Aug. 23. Jeremiah Lee Jackson, 32, of Mill Spring, pleaded guilty and was sentenced to 84-113 months in prison, or seven to a little over nine years, according to court records.

The Polk County Sheriff’s Office recently arrested a Saluda man on charges of possession of methamphetamine. Trevor Cassidy Young, 31, of Louisiana Ave., Saluda, was arrested and charged with felony possession of a schedule II controlled substance and possession of drug paraphernalia, according to the sheriff’s office.

The Polk County Sheriff’s Office PACE (Polk Aggressive Criminal Enforcement) Team recently arrested a Mill Spring man for delivering methamphetamine, according to the sheriff’s office. Jacob Tyler Waldo, 22, of Sunrise Drive, Mill Spring was arrested and charged with delivering methamphetamine and maintaining a vehicle to keep a controlled substance, according to sheriff report.

A woman from Tennessee was recently arrested on Aug. 16 and charged on drug trafficking and a weapon charge following the Polk County Sheriff’s Office conducting a traffic stop in Columbus. Roxie Maxine Kitts, 56, of Kodak, Tenn. was arrested and charged with trafficking in opiates, possession with the intent to manufacture, sell or deliver a schedule IV controlled substance and carrying a concealed weapon, according to sheriff’s office reports.

The Town of Tryon now has new policies regarding finances and employees driving after commissioners approved new policies during the town’s Aug. 15 meeting. Council met and approved the second and final reading of new financial policies requested to be implemented by the N.C. Local Government Commission (LGC) and a new driving policy, suggested by the town’s insurance company.

The City of Saluda now has new regulations for controlling noise after reworking its noise ordinance. The Saluda Board of Commissioners met Monday, Aug. 14 and approved the new regulations. 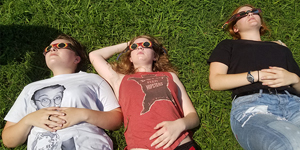 At least 200 people, likely many more, attended the Harmon Field Eclipse Party on Monday Aug. 21 to view the almost total solar eclipse. Food, music and other entertainment was provided with 200 pairs of solar glasses given away. As an otherworldly twilight fell over Harmon Field at almost exactly 2:38 p.m., the streetlights came on. (Photo by Leah Justice)

The Town of Tryon agreed this week to join the Town of Columbus and City of Saluda in paying for an engineering report from Jonathan Hollifield, with Watermark Engineering Inc., to detail the issues of the water interconnect between Tryon and Saluda. Tryon Town Council met Tuesday, Aug. 15 and heard from town manager Zach Ollis about the engineering report. Each town will contribute $8,500 towards the report, for a total of $25,500. 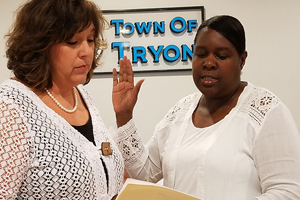 The Polk County Board of Commissioners approved a project budget ordinance and budget amendment to help fund running a water line to Looking Glass Creamery. The county applied for a grant in June to run a water line to the creamery, with the grant paying for 75 percent, and Harmon Dairy and the county funding the 25 percent match. Commissioners approved the ordinance and budget amendment during its Aug. 7 meeting.

Man shot in groin charged with assault with a deadly weapon

Following an investigation into a domestic incident that involved the shooting of a Rutherford County man on County Line Road on Monday, Aug. 7, the Polk County Sheriff’s Office charged the man who was shot with assault with a deadly weapon. Joshua Cuthbertson, 24, of Rutherford County, was charged this week with assault with a deadly weapon with intent to kill and violation of a protection order, according to the Polk County Sheriff’s Office.

Landrum mom arrested for child neglect after snorting a pill

Bright’s Creek up for bankruptcy sale until Aug. 31

The 4,600-acre golf and resort community in Mill Spring is being sold through a Section 363 sale approval process with all bids due to the United States Bankruptcy Court Southern Division of Florida, Miami Division, by Aug. 31.