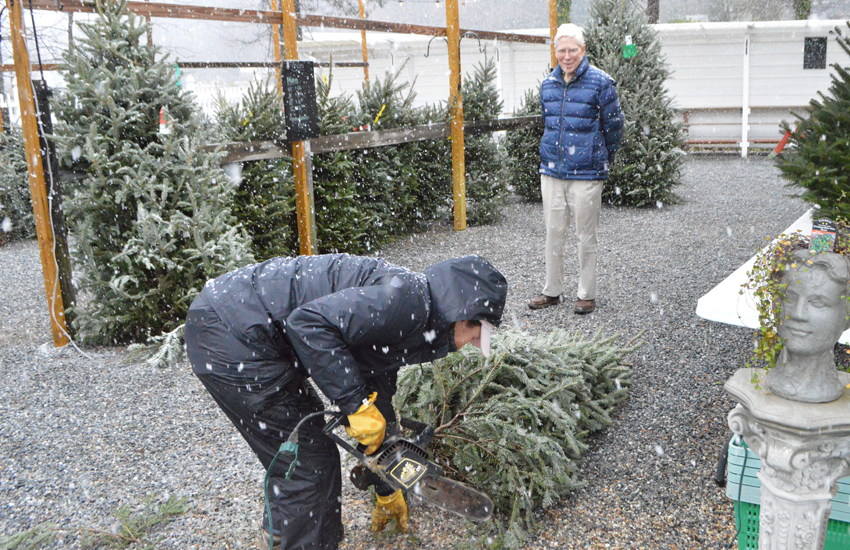 Last Friday’s snow made it feel like a white Christmas as Dylan Thomas trims the tree John Gardener of Tryon found at the Down to Earth Garden Center in Tryon. (Photo by Catherine Hunter)

LANDRUM, TRYON, COLUMBUS – If you haven’t gotten your Christmas tree yet this year, you may be out of luck. Area sellers have nearly sold out early this year.

The Garden Patch in Columbus had two trees left by 4 p.m. on Thursday, December 14. Down to Earth Garden Center had only eight or nine small trees left by Thursday evening and Ayers and Sons had sold all but about ten of their original stock of 150.

By Thursday afternoon, Benson’s Produce on Hwy. 108 in Lynn had sold all but three of their 380 trees. “We were shorted 100 trees on our order this year,” said owner Joey Benson.

According to most of the tree sellers there is a shortage this year of Christmas trees. Fran Garside, who, along with her husband, Gary Garside, owns Down to Earth Garden Center in Tryon, said the reason dates back nine or ten years to the 2008 recession. She said that year and a few years following, growers planted fewer tress in order to cut back on the cost of care.

“For the past several years they’ve [tree growers] cut back on the cutting,” she added. “I think they didn’t want to get stuck with left over trees.”

Though Garside and her husband bought 132 Fraser Fir trees in Newland, N.C., they had sold out of taller trees by November 30. By Thursday the only trees they had left were a handful of smaller trees, four to five feet tall.

“If we had more ten foot or taller trees we would have sold them as well,” she said.

Benson finds his trees in Jefferson County, N.C. and Roger and Jeanine Gauen, owners of the Garden Patch in Columbus, buy their trees in Spruce Pine, N.C. Gauen said he sold around 75 trees this year, which is fairly typical. He usually takes pre-orders form his customers, plus buys a few extra. 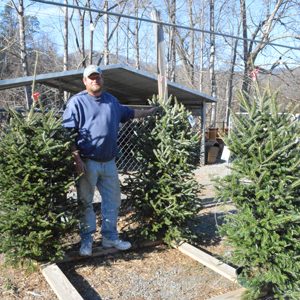 By Thursday, Dec. 14, Joey Benson of Benson’s Produce in Lynn had sold all but three of the 380 trees he stocked this year. (Photo by Catherine Hunter)

“This year we ordered all the trees we could get,” said Gauen. “Normally we have a few left this time of year.”

Paul Ayers and his wife Sandra, who own Ayers and Son Market in Landrum, find their trees from a grower in Banner Elk, N.C. Ayers has sold Christmas trees since he and his father, James, first opened the market 57 years ago.

“In the old days we sold wild grown cedar trees,” said Ayers who commented that tree sales have gone down in recent years. “I think it’s because the artificial trees have gotten so much better than they used to be. I like the real trees. I’m not into artificial.”

On Thursday Ayers had only a handful of the seven to nine foot trees out of the 150 he originally stocked. He said this year he couldn’t get the smaller table top trees because the grower didn’t want to cut them. 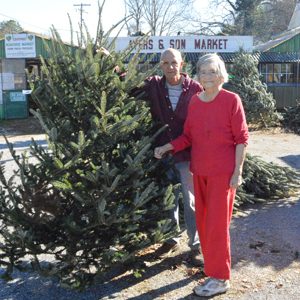 Paul Ayers of Ayers and Son Market shows Shirley Cantrell one of the 150 Fraser Fir trees he ordered from Banner Elk this year. (Photo by Catherine Hunter)

“They grow about a foot a year,” Ayers said about Christmas trees. “That means for an eight foot tree the farmer has eight years of spraying, trimming and care invested in it.”