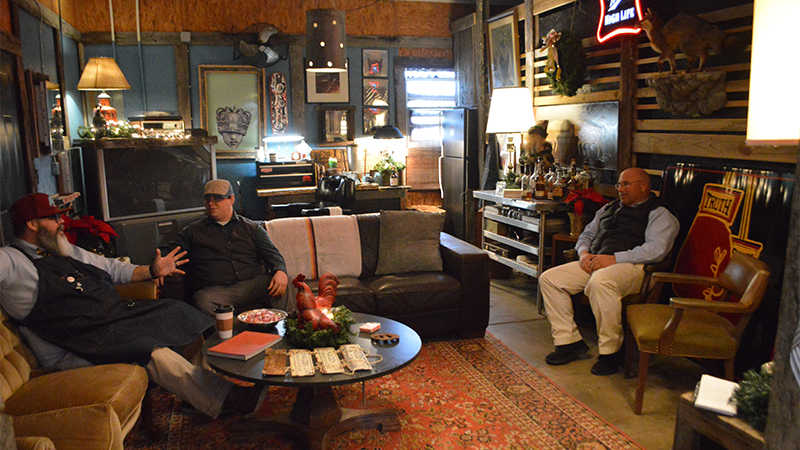 A man cave for a shave and a haircut

CAMPOBELLO – Just off Landrum Mill Rd. toward Campobello is a real, old-fashioned man cave. In an old barn, tucked off the road, are comfortable couches, a big screen TV, a mechanic’s tool box, deer heads, bottles of Jack Daniels and Jim Beam and, of course, a few beers.

“There’s no pool tables or game machines,” said owner Bear Tyler. “This is a place of business.”

The old-fashioned barber pole on the sign near the road gives a hint as to the type of business. Bear and Bull Barber Club gives the place a focus, but it’s much more.

Three years ago Tyler walked away from a life with an MBA, an engineering career, and his own business to become a barber. He started fixing up the old barn on his family’s farm and set out to create a high class barbershop for the “working class barber.” 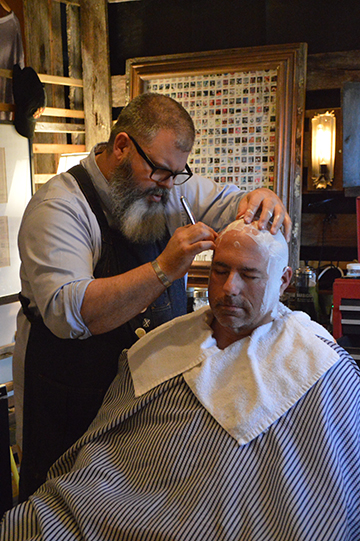 “It’s my calling,” Tyler said about barbering. “It’s a dying trade. The barbershops I knew were designed for the convenience of the shop owner. I wanted to make this shop convenient to the clients.”

Making that kind of convenience a reality includes creating a relaxed, welcoming atmosphere and working long, and sometimes odd, hours. Tyler works with only one customer at a time and all the appointments are for at least one hour per customer. This allows plenty of time for his customers to relax, have a cigar or a drink and talk about what type of haircut they want.

Tyler’s days typically start at 8 a.m. and end around 7 or 8 p.m., but he also tries to accommodate the men on second and third shifts.

“They’ve worked or driven a truck all day,” he explained. “They can come in here, sit back and unwind. They don’t have to wait in line and sit in a chair with five guys staring at them.”

Accommodating second and third shift sometimes means working from 7 a.m. until as late as midnight or so. However, Tyler doesn’t seem to mind. There’s usually a few guys hanging around talking cars or hunting. Friday nights are becoming popular. Most of the guys who get their hair cut on Friday afternoon or evening hang around. By dark there’s several enjoying good cigars or telling stories around the fire pit. In warm weather, Tyler opens up the big garage style door so everyone can enjoy the mountain view and be part of the conversation.

Ethan Waldrop of Inman, a new customer last week, said he was there because Tyler’s shop came highly recommended by a friend. “I was looking for a good man’s barbershop,” said Waldrop. “A lot of places today are stylist salons.”

David Lancaster of Chesnee agreed. “It looks like a hunting lodge in here,” he said, adding that sitting outside with a view of the mountains and enjoying conversation with other men was very stress relieving.

The hunting lodge effect is enhanced with the deer head on the wall and the stuffed fox behind a comfortable chair. Dark Asian style rugs mirror the smooth jazz rippling out of an old-fashioned turntable while the scent of a good cigar floats gracefully over the outside fire pit.

Dressed in a plaid shirt and a jean cloth barber’s apron, Tyler adds to the ambiance of another life and time. His black hair and the full salt and pepper beard reflect a century past as he chats with Waldrop about a car he bought from a mutual friend.

While he says he’s still a little surprised that his life took this turn at age 43, Tyler’s gift possibly comes from his mother, Sandra Willis, who studied cosmetology after high school. He’s also fond of using his grandfather’s old-fashioned straight razor when he shaves his customers.

Family and community are important to Tyler who said he tries to spend the money he makes back in the community. “My life is now in a 15-mile radius,” he said. “I serve Landrum, Tryon, Columbus and Campobello. Maybe a few people from Inman and Chesnee,” he joked as his grin got lost in his bushy beard.

In an effort to give back to the community Tyler is holding what he calls a “pop up shop” at Black Coffee in Tryon all day on Saturday, Dec. 16. He will be there with his barber chair to create a man’s style barbershop in the back of Black Coffee on S. Trade St.

The Bull and Bear Barber Club is located at 2440 Redland Rd., Campobello, or  Tyler can be reached for an appointment at 864-606-4142. The website is bullandbearbarber.com and the club is listed on Facebook and instagram at bullandbearbarber.