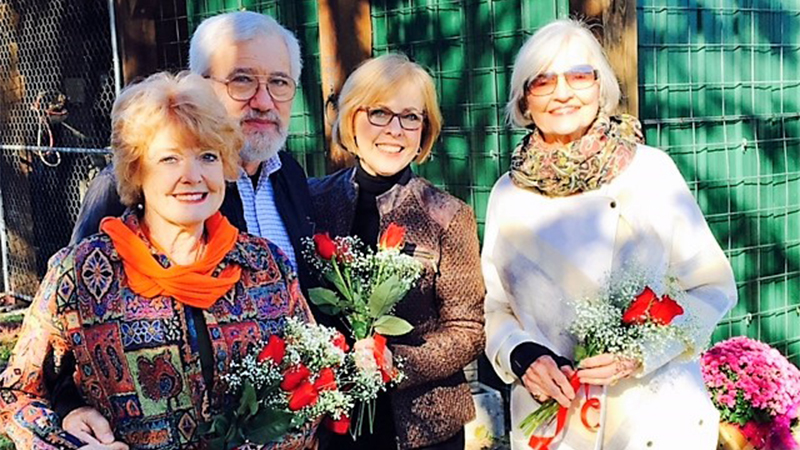 Cynthia and Colin Urquhart with Cathy Fischer and Wyndy Morehead

At 10 a.m. on Thursday, Oct. 26, Tryon Arts & Crafts School held a groundbreaking for the Shane Urquhart Metal Studio to which members and the public had been invited. The structure will be an extension of TACS’ current forge and will also include a much needed storage facility.

Executive Director Cathy Fischer welcomed everyone and explained that the project was initially inspired by a donation made by Cynthia and Colin Urquhart in memory of their son, Shane, who lost his battle with leukemia last spring at the age of 40.

Shane was an amazing bladesmith (two of his knives won the top award at TACS’ first juried show) and all-round craftsman. Shane had participated both as a student and as an instructor at the forge and was greatly admired by all who worked with him for his sweet, gentle personality as well as his amazing artistic talents.

He said that the new metal studio will enable TACS to increase their craft class offerings to include welding, cutting, forming, brazing and fabrication skills and techniques to help the school satisfy its mission. Students will have the opportunity to work with various metals such as low carbon steel, aluminum alloys, stainless steels, copper and its bronze and brass alloys.

Students will also be able to do torch work for glass bead making/lamp work. Myers said, “The studio will not be purposed to teach students how to weld so that they can get a job at a BMW plant, but rather to work with metal as a creative art form, such as sculpture. Students will not only be able to work with metal as an art form unto itself, but in multi-media projects as well, greatly expanding the class offerings for the school.”

Cathy then invited Colin Urquhart and former board member/past treasurer Jerry Pospisil to place the first dig to officially start the project, and it was a success!

Construction will be starting soon. Cathy welcomed attendees to call the office to volunteer their services at 828-859-8323.