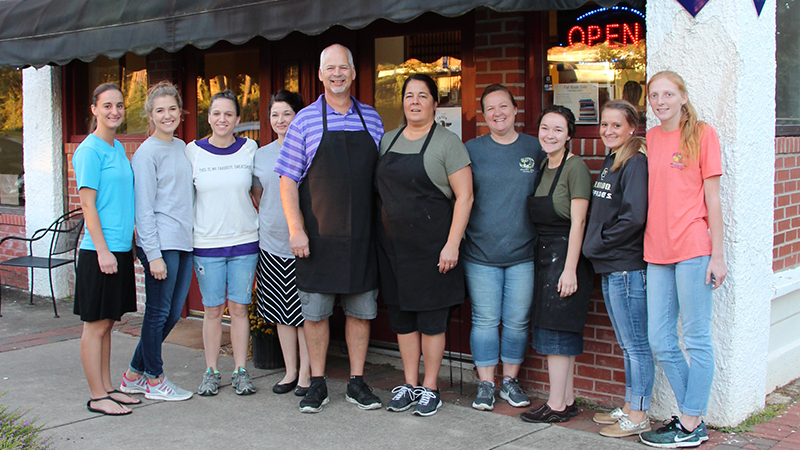 Surrounding Pat and Trish Overholt in the center are family members and Southern Manners employees including Ashley Schlabach, Latisha Schlabach, Grace Allison, Jennifer Johnson, Jessica Johnson, Julie Bacher, Malinda Price, Lori Wengerd and Debi Beiler. They are pictured in front of their popular restaurant on the corner of Mills and Peak streets In Columbus. Photo by Claire Sachse

A little restaurant with a big following

As a diehard grits eater, born and reared in the Carolinas, I was cautious to accept Pat Overholt’s offer of a small bowl of baked oatmeal, topped with fresh fruit and granola. But this is what he — as the owner of Southern Manners restaurant in downtown Columbus — elected to serve me, a menu item that he takes pride in. I was told the accompanying cup of cold milk was optional, to be poured over the warm oatmeal. It looked pretty enough to eat, but my southern appetite kept looking at the open-face homemade biscuit heavily smothered with milk gravy, packed with crumbled sausage and flecks of black pepper. And then, there was the homemade yogurt also topped with fruit. All served in simple white plates and bowls.

“I go through about eight chafer pans of oatmeal each week,” the Ohio-by-way-of-Florida transplant said, towering over my corner booth by the window that gave me a grand view of Columbus’ main drag, Mills Street. I could see three sidewalk tables and a well-kept patch of flowers. He’s a big guy with a big smile, outlined by a close-cropped and graying goatee. Baked oatmeal is something that he and wife Patricia introduced to the Carolina Foothills about four years ago, something that has taken root and become one of the most popular items on the limited but growing menu.

At 8 a.m. the clientele were still waking up with white mugs of coffee and news from their cell phones. Young working men in blue jeans, businessmen and women dressed for the office, casually dressed retirees in no hurry, a group of seven conservative Mennonites wearing black long dresses and trousers and the telltale white veil prayer covering caps. They all sat at either booths or tables with a few heading up the wide wooden staircase to the spacious second-story dining room.

Some patrons milled about the deli case, looking at the cold meats and salads or the racks of fresh-baked breads, package specialty foods, and the frozen to-go entrees. Low-volume classical and easy-listen music was playing. Wait staff quickly brought food to the hungry, and Pat would walk through every so often to slap a back, shake a hand, and greet the people who have made Southern Manners one of the most popular restaurants in town. With three other restaurants within a stone’s throw, Southern Manners does well, serving breakfast and lunch to 300-350 people each day.

But the oatmeal was worrying me. Oatmeal was something I fed my kids when they were little because someone said it was healthier than grits. They got instant fun-flavored oatmeal; I still ate slow-cooked grits with too much salt and butter. I started my breakfast with the gravy biscuit, which was about the best I’ve ever had. It was a big biscuit with more-than-enough milk gravy filling the plate. But it was the generous amount of sausage in the gravy that I found most appealing. I wanted to eat it all without stopping, but decided to be fair to the yogurt and oatmeal, and pushed it aside, saving it to be the last thing I would eat, giving me a lingering favorite flavor to start my day.

Restaurant-made yogurt was something I was familiar with, but you never really know about yogurt and those healthy probiotics. Sometimes it can be sweet and creamy; other times, it can have an overpowering twang. I dug through the top layer of fruit and granola to find pure white, smooth, and sweet yogurt with just a hint of a twang, just enough to remind me that yogurt is basically fermented milk. Mostly it was fresh and refreshing. Restaurant-made yogurt is another one of those dishes that Pat and Patricia introduced to the Carolina Foothills that became a hit with locals. It takes about 15 hours to make a batch, and the restaurant serves about three gallons a week.

Pat came by with a small plate with a large slice of thick-cut bacon. It was cooked to perfection, with the fat still intact, not rendered to nothingness. It comes from Ohio – like his oatmeal does – and he serves about 90 pounds a week. I would have liked to have saved a bit of the bacon to end the meal, but impulse eating got the best of me.

Soon, he was back with another small plate with toasted tomato-basil bread, something he thought I might like. He was right, because I had had it many times before, always asking for it when I get deli sandwiches or breakfast toast. If you want bread with flavor, this is the one to get.

Still that oatmeal was sitting there, waiting to convert another Southerner.

Pat and Patricia may not be Southerners by birth, but they have certainly earned honorary status through hard work and hospitality. Although he does his fair share of cooking, he gives most of the culinary credit to his wife, who is the only one between them to have any restaurant experience. Before they were married, she had been a cook in Florida. “My wife has her finger on most all aspects of the restaurant. I help on grill and just help where needed,” he admits.

They had come to Columbus in 1984 to help start the Mennonite church Foothills Community Chapel on Landrum Road and rear a family. He and his family are listed on the church’s website as members of the “pastoral team.” Until the construction business tanked in 2008, Pat had specialized in trim work. When the work dried up, he began to look for another income source. With much encouragement from local friends, he and Patricia began catering school and sports events and were soon catering weddings and such. That proved successful, and soon friends were suggesting that they start a restaurant.

Knowing that 98 percent of all new restaurants go belly up within three years, it was a risk for the Overholts, including their four children. But they started looking for a location, and after about two years, the space at the corner of Mills and Peak streets came available, a location that had seen at least two other restaurants come and go.

When they opened, they were “excited and overwhelmed,” Pat says. They opened Southern Manners in May 2013. What surprised them was “the time that you need to put into it, the time it takes to make it run smooth,” he adds. Most days, one or both of them are there 5 a.m. to 2:30 p.m. On Friday, which is doughnut day, he arrives about 3:30 a.m. “It’s a challenge for sure,” he says. “We try to offer different food than the other restaurants. You each have to find your little niche.”

There is seating for 110 patrons in the 2,500-square-foot restaurant with 17 people on the payroll. The restaurant’s Facebook page shows nearly 1,400 likes and a 4.9 out of 5 rating. TripAdvisor’s reviewers give it a 4.5 out of 5 rating. Now, friends are suggesting he serve dinner, to which he says, “not saying never but not in the near future.” He hopes to open a walk-up window next year.

All though the menu is far from radical, nearly all the food is made from scratch in the restaurant, including the soups, salad dressings, breads, and side dishes, such as pasta, broccoli, macaroni, and potato salads. Most breakfasts average about $5. Lunches — wraps, salads, and sandwiches — average about $6.50. It is the kind food that “Grandma used to make,” Pat says and adds that being Mennonite “influenced it in that it is the kind of food we cook. It’s what we grew up with.” He won’t give out any specific recipes, but he has a couple of cookbooks for sale with versions of their recipes.

The secret to his success, is “God’s blessing, hard work, and good employees. It’s our desire to do more than just serve good food. We desire that we become family,” Pat says. “I love it here,” he adds.

Still the baked oatmeal was waiting to make another convert. With a little bit of biscuit and yogurt set aside (just in case), I cautiously dug into the warm oatmeal. Beneath the fruits and nuts, I found a breakfast cereal that even this grits-lover would order again. Unlike grits, the oatmeal had a hardy substance and earthy flavor that would hold me until lunch time. It made me feel healthy and warm inside without being heavy. The warm cereal – from Ohio – played with the cold milk, creating a contrast of complementing temperatures. The fruits and nuts were just enough to spike the heartiness with freshness. Now I understood why Pat wanted me to try this specialty and why so many people love it. I was now a fan.

But never one to waste food, I still ate the last few bites of yogurt and gravy biscuit, leaving nothing behind but taking away an appreciation for new food served with Southern Manners. •

Steve Wong is a writer living in the peach orchards in Gramling, S.C. He can be reached online at Just4Wong@Gmail.com.