Saluda to give scout hut back to scouts 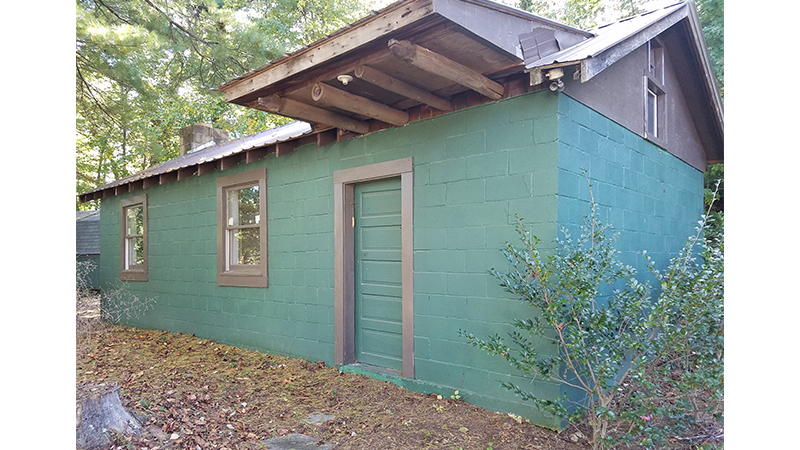 The City of Saluda is preparing a lease with the Saluda Boy Scout troop to take over the hut in McCreery Park. The city originally gave the boy scouts permission to build the hut in the 1940s. (photo by Leah Justice)

SALUDA –A hut in McCreery Park that the City of Saluda is currently using for storage and has leased to the Saluda Senior Center, will soon go back to its original intent for the boys and girl scouts.

Saluda City Council met Oct. 9 and heard from Boy Scout leaders Mike Ryan and Ryan Griffin who requested the hut be given back to the scouts.

Council directed attorney Jana Berg to prepare a lease for 10 years with an option to renew the lease. The lease will be for $1 per year for the Saluda Boy Scout Troop. The hut will also be used for Girl Scouts.

The lease will also state that the Boy Scout troop is responsible for renovating the building to bring it up to code and to maintain the building. If the troop is inactive for two years, the lease can be cancelled.

In the 1940s the city funded the local scout troop.

Ryan told council when the scouts took over the hut about 15 years ago it was in really bad shape and they spent about $20,000 taking out trees, putting in a propane heater and putting a fireplace in there. The Saluda scout troop has been inactive for a while, but now has a group of 10-20 boys who would like to use the hut to meet and for other activities, according to Ryan.

“If we need to raise some money to get it back in shape I’ll be glad to do an event to raise some money,” said Ryan. “You have restrooms right down the road. There are lots of things can come good out of it. It was originally the boy scout’s hut to begin with.”

City officials said they would first have to let the lease run out with the senior center, which is in December, but all were in favor of letting the scouts take over the hut.

Ryan said last year Saluda had some cub scouts but they didn’t have enough so parents had to take them to Columbus. He said this year there are already at least 10 interested and part of the interest is because they can have a place in Saluda to meet.

The hut is currently being used as storage for the city. There is no permanent heating or air conditioning but the hut does have a propane heater installed. The building is made of cinder block with a metal roof.

City manager Jonathan Cannon said he hasn’t checked with building inspections to see what needs to be done to change its use from storage to a meeting place.

Cannon said the city’s minutes are vague, but they say the city gave the scouts permission to build a hut on what was then known as Sunset Park.

Commissioners are scheduled to vote on the lease during the city’s Nov. 14 meeting.