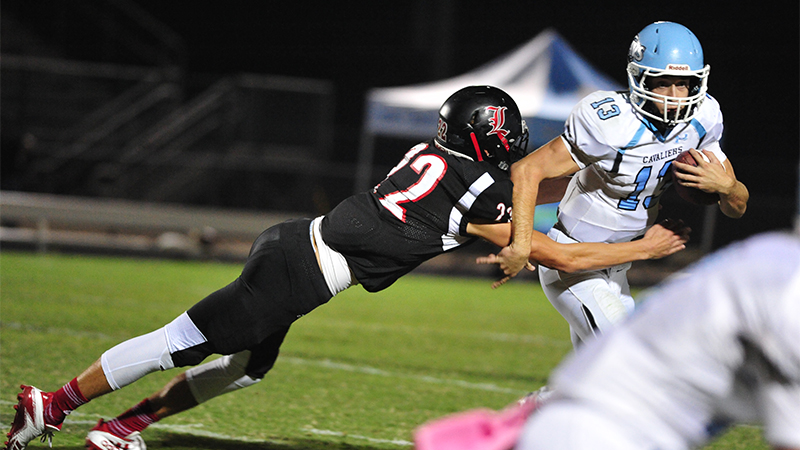 Landrum’s defense was sharp on the attack against visiting Christ Church Episcopal, and read the Cavaliers’ plays like a book. In Friday’s action Landrum’s Kolbe Pruitt (12) wraps up Cavailier quarterback Ellis Millwood (13).

LANDRUM – Is Landrum’s 1-7 season varsity football mark deceiving? One can make a compelling case for that. On Friday evening, Oct. 13, the Cardinals entered their home against Christ Church Episcopal with a 1-6 mark, while the Cavaliers brought a 4-3 overall record (1-0 in conference play). In the end, CCE was fortunate to escape with a 10-7 win.

In a nutshell, Landrum’s defense played superbly, the Cardinals’ Austin Hutchins ground out impressive ground yardage, and Michael Clark’s passing and running guided the Cardinals up the field. Landrum’s Jadon Lane was alone when he wrapped up one of Clark’s passes, and stayed well ahead of his pursuers, as he sped into the end zone in the fourth quarter, to close the gap to 10-6, before the ensuing successful PAT attempt.

“I appreciate everything you’ve given,” Landrum head coach Jason Farmer told his players after the game. “We’re going to get better starting Monday.”

Farmer told the Tryon Daily Bulletin, “Our kids played hard tonight, and I’m proud of them.” Farmer pointed out that Lane and other juniors would help the team through next season.

This Friday evening, Oct. 20, the Cardinals (0-3) in conference play, visit Pendleton, a non-conference team. Opening kickoff is set for 7:30 p.m.