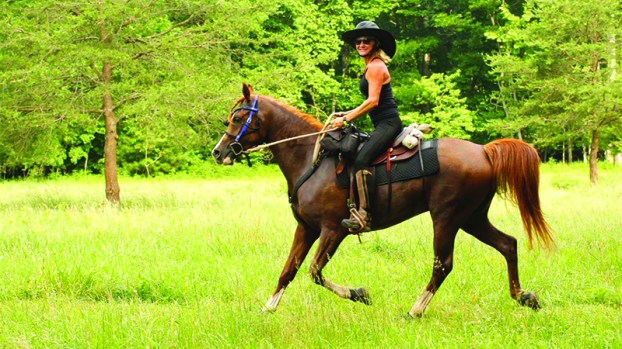 Marianne Williams and Aabsolut Bling will be back on “XP” trails next summer.

Regular readers of Appointments will remember that we recently featured endurance rider Marianne Williams of Tryon, who was heading off to compete in the Mongol Derby. Deemed “the longest and toughest horse race in the world” by the Guinness Book of Records, the Derby gives riders up to 10 days to cover 621 miles across high passes, open valleys, wooded hills, floodplains and the expansive grassland “Steppe” that covers much of Mongolia. And they do it all on a changing cast of semi-wild Mongolian horses who are switched out every 25 miles, first-come, first-served.

Derby organizers are blunt in telling would-be competitors that they stand a high chance of being seriously injured during the race. And that’s what happened to Marianne, who fortunately lived to tell the tale.

“I had been riding for four days, and had already covered about 350 miles,” she recalls. “The variety of terrain was just amazing. We would be riding in the desert but looking at snow-capped peaks. One day we’d have 80-degree temperatures and the next we’d have 30 mile-per-hour winds and sleet hitting you on the left for two-thirds of the ride and full in the face for the rest. And we rode through herds of wild horses, goats and sheep along the way.

“There were probably 40 horses to choose from at every station, with a mixture of good, poor, and some just plain evil. I had one that kept wanting to throw me off – it did throw me off twice. Then I had a stallion when I was riding with a group of five people, and he and I went out front and led the group the whole day, with the reins down on his neck.”

But as unpredictable as the horses could be, it was a much smaller animal that ended Marianne’s ride: a Mongolian Marmot, a relative of our very own domestic groundhog. Actually many marmots were probably involved, since it was a tunnel system they’d built which collapsed under Marianne’s horse. Both horse and rider fell, and Marianne was knocked unconscious and had her left clavicle broken in four places.

“Luckily we were within sight of the next camp, coming in after 75 miles. I was just ready to start my trot-in for the vet to check my horse’s soundness when it happened,” she said.

A Derby medic set up a tent around Marianne and someone held her head while the medic sedated and then stabilized her. A worried fellow competitor stayed outside the tent the whole time.

The team was able to go with the regular ambulance, so Marianne was strapped down for a two-and-a-half hour ride over the Steppe’s rutted roads to a hospital in Ulaanbaatar, Mongolia’s capital and largest city (pop. 1.4 million).

Marianne was X-rayed in Ulaanbaatar, where the doctors could see that she would need surgery to put her clavicle back together. Because she had bought trip insurance (note to self!), she was able to stay in the hospital for the two-and-half days it took for the paperwork and releases to be completed.

She was then flown into Moscow on one day, and on to New York City the next, in a bed in first class, again thanks to the trip insurance. After a night in NYC she was flown to Charlotte and drove herself home.

Once back home, Marianne had surgery to repair her clavicle, performed at St. Luke’s Hospital by Brian Rosenberg, MD, FAAOS. The procedure involved harvesting bone from her right hip and making a paste of it to help the breaks in the left clavicle knit back together. When I spoke with her 10 days post-surgery, she had another few days before the stitches could come out, and about three months before she could “do anything dangerous like riding.”

Thoughts on
the Derby Journey

Marianne is a very experienced traveler and rider but Derby competitors endure some unique challenges. “One thing is that Mongolian horsemen do not work their horses on the right side at all – they do everything from the left. They don’t groom, tack up, walk around, or even touch them on the right side. So you have a semi-sane horse on the left side and a crazy one on the right. And I fell off to the right, so the horse went a little crazy there.”

Derby riders also have strict weight limits – only 10 pounds can go with you on the saddle, including all your supplies. “I had an extra change of riding clothes, a couple of pairs of gloves, extra socks, my phone, and batteries for my GPS. Instead of carrying a sleeping bag I used a silk sleeping sack because of the weight.”

She thinks the thing most people would find surprising would be staying at the camp or ‘Ger,’ which is like a Yurt. “The only thing you have for sanitation is what they call a ‘long drop’ – a hole in the ground about a foot deep where you just squat. It has three walls and an open side but the walls are low so that people can see your head at all times and not accidentally walk in on you.”

I had to ask the obvious question: “Are you going to try again?” To which the response was a fast and unequivocal “No.”

“It is just too much of a crap-shoot to me,” she said. “You can be as good a rider as possible, be fully prepared, know exactly how to run your GPS, but then you might get that one crazy horse and there’s nothing you can do.

“It’s just so dangerous. I think I really tempted fate on this one and I have many more things I want to do on horseback and in life. But it was truly an epic adventure I was enjoying until I got knocked out.” (It did prove too dangerous for her phone, which was destroyed along with all her photos in the accident.)

The next adventure Marianne has planned is to spend two or three months next summer in California, Utah and Colorado – on her own horses – doing “XP” endurance rides. These are multi-day events up to five days of 50 miles a day for 250 miles total. She’s already had experience and success at those. “It’s what I really like to do, see as much of the country on horseback as I can,” she says.

In addition to possible surgical scars, Marianne has another souvenir of her experience. She ordered a Mongol Derby saddle in advance to get used to it before the Derby, and really likes it. “It’s a very minimal saddle with a thin pad, and we used our own stirrups and leathers. It lets you really feel the horse under you.” So while she won’t be in Mongolia again, she may be taking a little piece of it with her on the trails. And may they all be happy ones. •

Editor’s note: Marianne wasn’t the only “Carolina girl” attempting the 2017 Mongol Derby. Julia Fisher (Hartsville, S.C.) retired from the race with cracked ribs, while the team of Rachel Land (Easley) and Clare Summers (Pendleton) crossed the finish line in a joint 19th place. Salute! Which is pretty good considering the race had 42 starters and 36 finishers, according to the Mongol Derby organizer’s website.

Judy Heinrich is a freelance writer serving national clients in diverse industries. Judy writes for the Tryon Daily Bulletin and Foothills Magazine on all things horse related. She can be reached at jheinr@windstream.net.

A Brit in our Midst

Young UK farrier works with Landrum’s Jeff Pauley Even among the diverse group of farriers we have working in the... read more