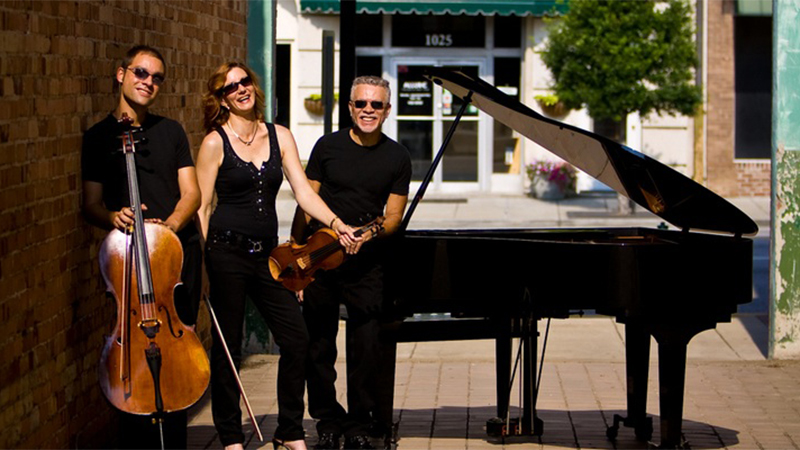 Upton Trio will explore the theme of “The American Story” at 3 p.m. Sunday, Oct. 1.

It is the mission of the Upton Trio to unite with community partners, individuals and industry to bring chamber music’s transforming power where it is needed.  When we attach emotion to any content, there is a higher likelihood it will be internalized.  It is a way to introduce a magnificent art form and simultaneously to create an enduring awareness of U.S. History.  Therefore, the Upton Trio commissions Ms. Taylor annually to compose, in this case, “The American Story.”  She translates educational content into music.  Grades 4 through 12 are educated by “The American Story” through the art of chamber music. A pre-post concert test measures the academic benefits of the original chamber music programs. During the seven years of assessed Upton Trio educational programs, results have consistently and dramatically improved student achievement in every school within the Kershaw County School District.

The first movement of “The American Story” is “Genesis”.  It conjures the desperate, perilous, anxious transatlantic migration to America from the European continent. From the African continent, one can hear the terror and mind numbing experience of those who were kidnapped into slavery. At one moment in the movement “Amazing Grace” is musically quoted. Perhaps to convey the presence of hope in the midst of horror.

The second movement, “Cry in the Wilderness,” is a fervent, blues-based prayer.  It begs the question, “When will the lost colonies, failed crops, genocidal epidemics and human slavery end?”

There are “Consequences” (movement three) to just and unjust wars.  We all know the price is high and terrible.  The composer was compelled to conclude “Consequences” with a repetitious fade into the depths that begs us to question – when will the human family abandon our erroneous idea of separateness?

“Synthesis in Transition:  American Becoming America,” the fifth movement reflects our lives today.  We are always in an anxious hurry.  Not enough time is taken to remember, in the still quietness, who we really are.  To question what is of value. Does constant learning, spiritual expansion and above all, love, have any place in achieving the American aspiration of life, liberty and the pursuit of happiness for all?

Upton Trio concert programs present a variety of musical styles. The Sunday, October 1, 3 p.m. concert consists of:  contemporary American styles with “The American Story.” Mid-century neo-impressionism will be heard in the “Three Nocturnes” of Ernest Bloch. The concert will conclude with Felix Mendelssohn’s Trio Number One in D minor, Opus 49, a favorite early romantic masterwork.

The Sunday, Oct. 1 at 3 p.m. performance for Music in Landrum will be an encore performance by the Upton Trio. Since last year’s concert, the Trio has concluded the workshop phase of a new American musical “An Extra Penny.” Mary Lee Kinosian is the composer of “an Extra Penny.” The music for this Broadway-bound show originates entirely from the educational outreach programs that Ms. Kinosian has composed for the Upton Trio. The Trio looks forward to the next phase of the musical production which will be a run at the regional theater level in a metropolitan setting.

– submitted by William Shepherd, Director and Pianist for The Upton Trio