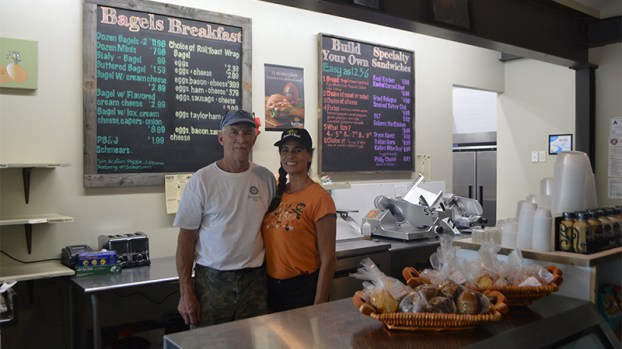 Katie Doyen and her boyfriend, Don Jagger, are celebrating the opening of her new deli on South Trade Street in Tryon. (Photo by Catherine Hunter)

TRYON – “Fuhgeddaboudit” is a term more often heard in Jersey than the Thermal Belt, but Katie D’s NY Bagels and Deli has brought it to Tryon. The New York style deli opened in August and is fast becoming a hangout for morning coffee and conversation.

Katie Doyen, who moved from Long Island to Tryon 19 years ago to be near family, said she always planned to open a shop as soon as the kids were grown. With her son, Tij Doyen, graduated from college and her daughter, Murphy Doyen, in graduate school, she decided now was the time.

“I used to own a deli in New Jersey and New York,” she said, explaining she tried to make the Tryon store as authentic as possible.

While their bagels are authentically boiled and par baked in New York, Doyen finishes the baking right here in the deli. She also gets hard rolls and gyros from New York, but all the other breads are local artisan breads baked by Standing Stone Bakery in Mill Spring.

Doyen said all the salads and sandwiches are made in house and she uses her mother, Barbara Schuvart’s, recipe for the in house made New York style cheesecake.

The small shop, located at 255 Trade Street, has a homey atmosphere with tall tables, a couple of comfy chairs, an old trunk for a coffee table and local art decorating the walls. A few New York sayings like Fuggedaboudit are sprinkled amongst modern art, paintings of Morris the Horse and of course pastoral horse scenes.  Doyen credits her boyfriend and local contractor, Don Jagger, for the great remodeling job.

The deli is open Wednesdays through Saturdays from 6:30 a.m. to 3 p.m. and Sundays from 8 a.m. to 3 p.m. In addition to the sandwiches, bagels and coffee, they offer gluten free and vegetarian options and catering. Doyen said, in the future, they hope to offer delivery to Tryon, Columbus and Landrum.

Senior Lifestyles: Socialization can save your life

We all know that there are illnesses and conditions that are truly life-threatening. One problem facing more than 33 percent... read more