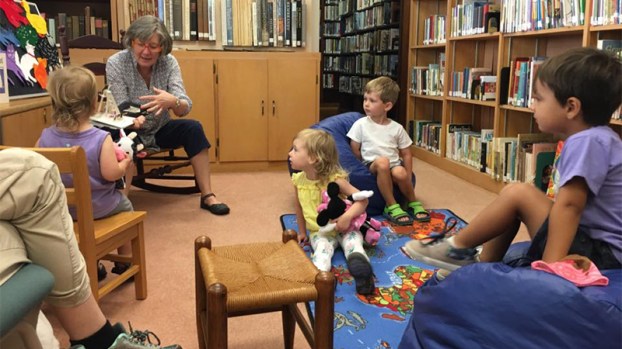 Where Everyone Pulls Together for the Kids

The beginning of 2017 was a scary time for Tuesday School in Tryon. For 45 years, parents had sent their little ones to preschool at the cooperative, but the funding from a long-time donor had dried up and the school was in danger of ringing a final dismissal bell. Instead, the parents publicly rang an early warning bell — for themselves and the entire community — that in effect said, “We need to raise funds for the school or it will close.” Now at the beginning of a new academic year, Tuesday School is funded and ready for business as usual.

“It was very scary and sad,” spokesperson and parent Laura Smith said. “This school has been here for 45 years. It’s not just a school. It’s a part of the community. And there aren’t many other choices of preschools in the area that offer half-day programs. By reaching out to the public, we now have a (new) very generous donor who has agreed to fund our monthly rent and match our fundraising income. We have restructured our board to have more parent involvement in the administrative and financial departments. In turn, we will cut costs by taking on more of the duties, which the parents typically had in the earlier years. We have also started applying for grants, and have some great fundraisers planned.”

There are several schools across the nation with the name “Tuesday School,” but they have no affiliation with the local institution that is housed in two rented two rooms at The Congregational Church on Melrose Avenue. Locally, Tuesday School is a cooperative, meaning literally everyone, including parents, has to help make the school function in addition to paying tuition, which varies according to the child’s age and attendance. Typically, 2-year-olds attend half-day class on Tuesday and Thursday for $140 per month. Three-year-olds attend Monday, Wednesday, and Friday for $170 per month. And 4-year-olds attend five days a week for $236 per month. The school day is officially open 9 a.m. to noon, but early birds can arrive at 8 a.m., and the lunch bunch can stay as late as 1 p.m.

“We are very excited and feel that we will have some successful fundraisers to come,” Smith said. “Our first one will be in September. Families will each be responsible for finding a least one sponsor. The sponsor’s name will be displayed on our banner that we hang in downtown and at our events. Then we will have poinsettia sales in October through November. This has been something we have done for many years and is always successful. We often have a tent at Super Saturday in March, and we plan to sell Krispy Kreme Donuts through their fundraising program. We did this last year, and it was super easy and a big hit! And our last and biggest fundraiser will be our Online Auction, which will be live from April 28 through May 5. We did this last year and it proved to be more successful than having an event with an auction like we used to do. Every family is responsible for helping with fundraising, but there is an opt-out fee incase families are unable to.”

Originally, Tuesday School was organized by mothers who wanted a little free time away from their kids. They would take turns caring for each other’s children on Tuesday mornings, while the other mothers would catch a break. Today, the school is known for its innovative and fun curriculum.

“We are proud to be an independent and parent-run preschool,” Smith said. “There aren’t many left in the country. It’s a lot of time, involvement, and hard work, but we feel it is worth it when the children get such a great start on life. Some may think it’s just preschool, but as parent myself, I am proud to say, we have amazing teachers and the children learn so much, yet still get to play and have fun!

“We want the public to know that we are working very hard to keep Tuesday School a part of the community and that we still have some spaces available for students.” •

Sometimes, it’s best to just stand there It really was a dark and stormy night, just perfect for me to... read more