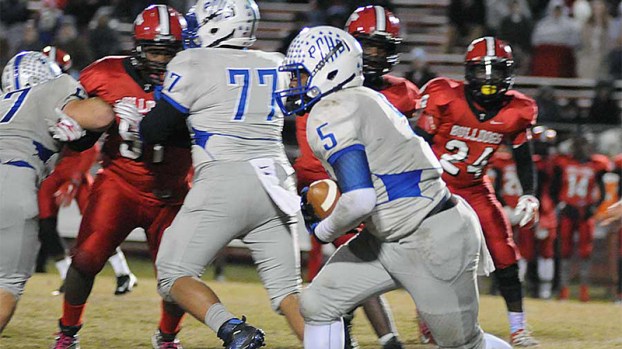 Polk County will no longer face 2A powers such as Thomasville in the state football playoffs.

1A classification much different than Polk County’s previous stay

A lot has changed in the 1A ranks in that time.

As the Wolverines return to the NCHSAA’s smallest classification in the 2017-2021 realignment, the 1A division that awaits has a much different feel. Non-traditional schools – charter, magnet and non-boarding parochial schools – comprise a growing segment of the class and have become the programs to beat in many sports.

* Non-traditional schools have won three straight titles in girls tennis and have claimed six of the last eight state finalist slots, with Mount Airy the only exception in those four seasons

* At last season’s 1A state girls cross country meet, the top five schools were non-traditional schools. A public school hasn’t won a 1A state title since Hendersonville did so in 2010.

You get the idea.

“Moving down, there are a lot of charter schools,” said Polk County athletic director Rex Wells. “Some of those schools have become specialized in certain sports. When I was at Asheville (as athletic director) and going to state championships, it was just tough to watch kids from real small communities get beat by big-city charter schools.”

The structure of the playoffs will also be a very different situation for Wolverine teams this season. With only two other Western Highlands Conference 1A schools – Avery and Mitchell – Polk County will have a good shot at earning the conference’s lone automatic berth in many sports, awarded to the highest 1A finisher in the conference (the exception to that rule would be if two 1A schools finish 1-2 in the regular-season standings in any sport. In that case, both schools would automatically qualify. The winner of the league’s postseason basketball tournament will also automatically qualify).

Once in the postseason, though, Polk County teams will also deal with a much different playoff structure:

* 48 teams in all sports except tennis and wrestling, in which 24 teams will qualify

* In football, the 48 teams will be divided into two separate 24-team brackets based on size.

The playoffs will then be seeded in the same manner as all other classifications, using a process being given a one-year trial by the North Carolina High School Athletic Association:

* Then, all conference tournament champions and at-large qualifiers will be seeded by MaxPreps ranking

* Byes will be awarded to the highest seeds possible

* In any matchup, the highest seeded team will be the home team unless otherwise determined by the NCHSAA.

“They reduced the playoffs from 64 teams to 48 teams,” Wells said. “That means there are going to be some first-round byes. There will be eight byes. Some conference champions will have byes, others will go into the first round. If your school has a bye and an open date at the end of the season, you could wait three weeks before your first playoff game.”

Wells noted potseason travel will also increase as the majority of 1A schools are in the far western and eastern ends of the state.

The NCHSAA altered its realignment process for this four-year term, moving away from its traditional approach of placing 25 percent of its total membership in each class. For this period, member schools opted to go with a 20-30-30-20 model, counting only football-playing schools, rather than the usual 25-25-25-25 approach. The 1A class will actually have more than 20 percent of all members due to the number of non-football playing schools.

Despite the changes to the 1A class, Polk County administrators and coaches have been looking forward to the move, feeling the school district is a better fit with other 1A districts.

Josh Trejo learned the sport of soccer from Lennox Charles, which only adds to the sentiment of following Polk County’s... read more